Setting the Bar on the Track

Hastings High School Student Setting the Bar on the Track 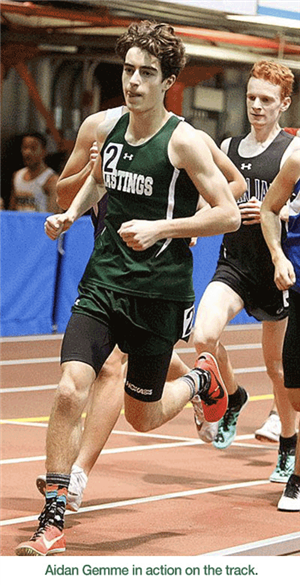 When it comes to Hastings High School athletes, senior Aidan Gemme is the one to catch.

With a background in soccer, Gemme already had a firm foundation in competitive sports when cross-country coach Molly Guilfoyle approached him about running for the Yellow Jackets. Now in his second year with the team, he is setting records and receiving accolades for his abilities on the track. After being named as Con Edison’s Athlete of the Week in December, he was recently selected as the Westchester/Putnam boys’ cross-country runner of the year.

“Just being recognized has been really gratifying,” he said. “It’s a reflection of the hard work that I, my team, and my coach put in.”

Convincing Gemme of his potential in the sport was no easy feat. While participating in winter track, Gemme caught Coach Guilfoyle’s eye as a perfect fit for the cross-country team.

“Every season he ran winter track I would tell him ‘You’ve got to run cross-country,’” she said. “I am really happy that now he is seeing the success and accolades.”

Gemme put his focus on cross-country and fell in love with the sport.

“I’m fascinated by the capacity to push yourself to your limits and see how far you can go,” he said. “Running is the perfect empirical way to follow that.”

Now the cross-country team captain, Gemme has proven his abilities in the sport this past year. With the pandemic pausing sports and competitions throughout the state, many students put the brakes on training while Gemme took the past summer to forge ahead and work harder than ever before.

“It really hasn’t affected my ability to train,” he said. “The racing aspect wasn’t the same but I’ve been able to train really hard without any other interruption.”

It was clear the training worked after winning the Section 1 Southern Westchester Small School Championship this November, posting two of the fastest times this season.

“It’s been really exciting to set the bar for the next group of athletes to be the new record breakers,” he said. “I see younger athletes working hard and falling in love with the sport like I did.”

Gemme proclaims his athletic prowess is partly owed to his amazing support team, consisting of his teammates, his family, and his coach. Gemme said receiving training through the summer and throughout the pandemic from Coach Guilfoyle made all the difference.

“Coach Guilfoyle has been an inspirational figure, not just for my running career but in my personal life,” he said. “Having that support gives us confidence, she is our backbone and it’s made me really proud to wear the jersey and represent Hastings.”

A well-rounded student, Gemme fills his off time with music and schoolwork. He has recently committed to running track and cross-country for Amherst College next year.

“I’m looking forward to it,” he said.