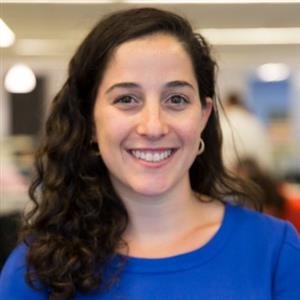 Kate Berner always knew she wanted to work in politics.

As a Hastings High School student in the early 2000s, Berner dreamed of a career where she could make a difference. Now, as the new White House Deputy Communications Director, her dream has come true.

Like many successful people, Berner traces the roots of her career to a teacher: Dr. Robert Tucker who taught history at the high school. Tucker, who died in 2008, was a revered teacher at Hastings High School for nearly 40 years.

“It definitely started in high school with my AP US History teacher Mr. Tucker,” she said. “I had been interested in politics before then, but Mr. Tucker and that class had a big influence on who I am and what I studied in college.”

A 2006 Hastings High School graduate, Berner held a number of positions in the Obama Administration including director of outreach, deputy director of administration in the Office of the Vice President and special advisor in the U. S. Department of Commerce.

In April 2019, she joined the Joseph R. Biden 2020 presidential campaign as the deputy director of communications where she managed campaign messaging. Since Biden’s inauguration as the 46th president of the United States, Berner has been busy at work as his Deputy Communications Director.

“It’s very important to the president that we come in now and immediately get to work,” she said. “We had a very busy transition, planning for his first few weeks and months in office. And that is because millions of families are suffering, they have lost wages, or they have lost their jobs from the economic crisis.”

While her career has taken her all the way to the White House, Berner looks back on her upbringing fondly and credits both the schools and the small town environment of the Village of Hastings-on-Hudson with helping her along the way.

“My favorite part about Hastings High School, and growing up in Hastings, was that everyone knew each other,” she said. “It wasn’t cliquey like it is in movies, people were able to do many different things at the same time.”

Berner made her first official foray into politics in college volunteering with the Obama campaign. But she said her foundations, her views on politics and the role of government, go back to Dr. Tucker’s class. Even now, nearly 15 years later, Berner said his lessons have stayed with her.

In December, Berner was one of several "qualified, experienced communicators" named to President Biden's incoming communications team. Since his inauguration, Berner said, the president has hit the ground running.

Ever the communicator, Berner didn’t miss the opportunity to talk up her boss. “In just the first few days since he was inaugurated, President Biden has signed 27 executive actions, and several other agency actions all tackling the four crises that our nation faces: the virus, the economic crisis, the climate crisis, and the racial equity crisis,” she said. “It’s been extremely busy, but there is so much work to do and so much the president can do through executive action.”

Berner also spoke on the American Rescue Plan, President Biden’s stimulus bill to fund a national vaccination program and provide immediate direct relief to communities, working families, and small businesses that are struggling during the COVID-19 pandemic. Berner praised the younger generation’s growing interest in politics and said she hoped it would continue.

“What I really hope for students is they don’t lose sight of the importance of politics,” she said.

“Things are going to get better under President Biden. That’s his goal. That’s his mission. But folks need to stay as politically engaged over the next two years, four years, and ten years as they are now. We saw rock bottom of how important government is in the daily life of citizens across the country. Now those blinders are off and it is our responsibility to ensure they don’t come back on.”

Berner’s advice to students thinking about a career in politics was to not wait until school is over.

Having worked on the Obama campaign while still in college, Berner said her experience volunteering was invaluable to her career.

“Just get involved,” she said. “Find opportunities, whether they are in Westchester County or in New York, work on races, volunteer, intern, or do a fellowship to get your hand in and get involved outside of a classroom.”