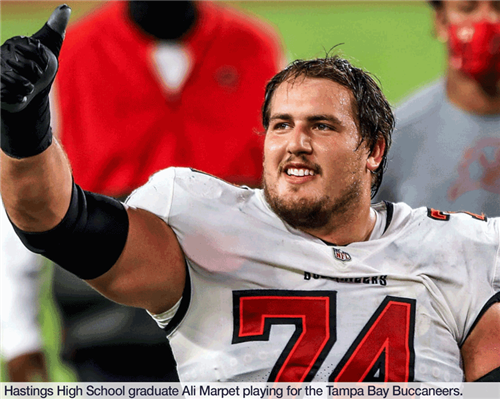 A Hastings High School graduate is seeking to win big on the gridiron in the 55th Super Bowl this weekend.

Ali Marpet didn’t always have the physique of a football guard for the NFL. In fact, he had put football aside when he was a 160-pound freshman at Hastings High School. Instead, he focused on basketball, becoming captain of the junior varsity basketball team in his sophomore year and earning all-league section twice. He returned to the Yellow Jackets football team two years later 50 pounds heavier and 10 times more determined.

“He was an unbelievably dominant player for us,” said then Hastings football coach Joe Vaccaro. “You look at the highlight films and it’s just man versus boys.”

“There were no distractions for him,” said Marpet’s former football and basketball coach Ezra Elliott. “He understood from a really young age that it was about the team first and there was no space for individual egos.”

Under the guidance of coaches like Elliott and Vaccaro, Marpet excelled on the field and proved himself as a football player. Playing as a two-way starting lineman, Marpet led the Yellow Jackets to the Section 1 finals in his senior year as a co-captain of the team, picking up all-state honors along the way.

“He is the best player I have coached at the high school level,” said Vaccaro. “He worked really hard and earned everything.”

Already a powerhouse on the gridiron by graduation, you could have expected Marpet to enlist with any Division I school but he instead decided on Hobart College, a Division III liberal arts college in Geneva, New York. Lending his talents as left tackle to the Hobart Statesmen, he was selected as the first ever NCAA Division III player to participate in the 2015 Senior Bowl where he was named “biggest riser” by Sports Illustrated. By then, his name was already making the rounds in the pro-football world. 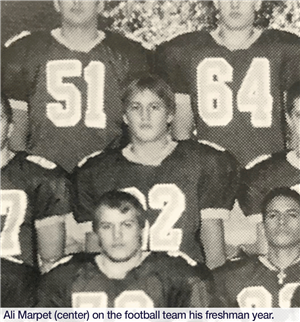 “I knew there were conversations that he might be drafted and that alone was great,” said Elliot. “But then Tampa Bay traded up to draft him and that was pretty wild.”

Marpet made history as the highest-drafted pick of the NCAA Division III, when he was picked in the second round of the 2015 NFL draft by the Tampa Bay Buccaneers. Playing as their guard since then, he has helped them on their way to this year’s Super Bowl. 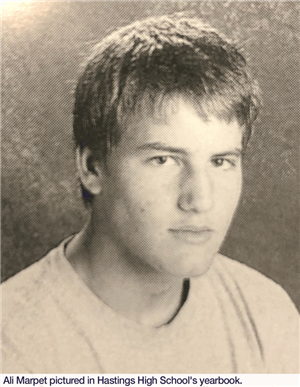 “He has been tremendous in the NFL,” said Vaccaro. “He really is one of the better football players in his position.”

Playing in their home stadium of Tampa Bay, the Buccaneers are set to go against defending champions, the Kansas City Chiefs. Back in his hometown of Hastings, his former coaches will be rooting for him and his team and hope he can return a Super Bowl champion.

“The whole football staff are very happy for Ali,” said Vaccaro. “We’re proud of him and we’re happy we played a small role in where he is today.”

For Elliott, being anxious before the Super Bowl isn’t a strange feeling as a self-described Patriots fan but having a former student on the field changes things.

“I’ve watched my teams in the Super Bowl before,” he said. “But I will be the most nervous for this one.”