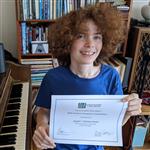 Oboe, clarinet, alto saxophone, bass clarinet, and the bassoon – these are the instruments Jasper Zimmerman used to create “Swing State,” an original composition that is now recognized nationwide

The eighth grader at Farragut Middle School has received an honorable mention after entering “Swing State” for reed quintet in the 2020 Student Composers Competition held by the National Association for Music Education or NafME. His piece was one of only three from K-8 to be recognized and only one of two from the New York.

“This is a huge honor and I am just absolutely thrilled,” said Jonathan Riss, Jasper’s teacher and sponsor for the competition. “I can’t think of another Hastings student more deserving of such an honor.”

Jasper began studying the piano at age seven and his pieces were being chosen by the New York State School Music Association to be performed at its Young Composer Honors Concerts only two years later. Playing in many of Hastings-on-Hudson’s music programs, Jasper has honed his skills both at home and in the classroom.

“Mr. Riss is a really good chorus teacher, I learned a lot from the songs we do in chorus,” Jasper said. “I’m also in the high school jazz band with Mr. Day and he is also a really good teacher.”

Jasper came up with the idea for “Swing State” whilst playing and submitted his composition only a few weeks later to Mr. Riss. For the competition, teachers and students from kindergarten to graduate school were invited to submit original student compositions for Symphonic Orchestra or Reed Quintet. Their pieces were judged by three criteria: compositional technique, overall musical appeal, and originality. Though Jasper’s composition is similar to some of the music he has produced previously, there is something that makes it unique.

“I do a lot of different types of music, so it is not that different from other things I’ve done,” he

said. “But I’ve never written for this instrumentation before.”

The winning pieces were slated to be performed at the NAfME national convention in Florida, but unfortunately that event has been cancelled. Instead, plans are being made for Jasper’s composition to be performed by professional musicians during an online concert next spring. In addition to composing music, Jasper keeps busy with his schoolwork and editing and designing the Honeycomb, Farragut Middle School’s newspaper.

“I’m still composing. I was actually working on a new composition today.”

You can listen to Jasper’s composition “Swing State” here!

You can also see the list of the 2020 Student Composers Competition winners, including the honorable mention for Jasper, Mr. Riss, and Farragut Middle School, on the NAfME website:
https://nafme.org/programs/contests-calls-competitions/nafme-student-composerscompetition/