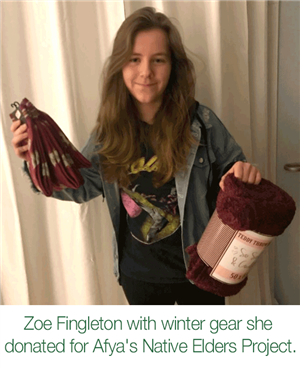 Three Hastings High School sophomores are spearheading a drive to collect winter gear and clothing for Native Americans in need.

Working with the Afya Foundation, Sam and Reed Kennedy and Zoe Fingleton are collecting warm clothing for Native American elders in five states.

According to Afya, Native Americans have the highest rate of COVID-19 infections in the United States. Native elders, keepers of tribal culture and heritage, are most susceptible to infection and subsequent complications. The cause caught the attention of Sam and Reed Kennedy.

“There’s already limited access in these areas, so having this gear is super important,” said Reed. “Now in December, and also during the pandemic, its especially important that these people can stay comfortable and healthy.”

Sam added, “Winter is the harshest season and now more than ever we need to come together and help each other, especially when other people might not have the resources we have.”

Starting with friends and family, Sam and Reed used social media to spread the word about their campaign. Fingleton joined after hearing of their work and helped collect winter gear from her friends and loved ones to add to the donations.

“When Sam and Reed got together about this, I thought it was a really great thing,” she said. “It’s such a hard time for everyone, especially in these communities. So, it’s really great to help people when we are privileged.” 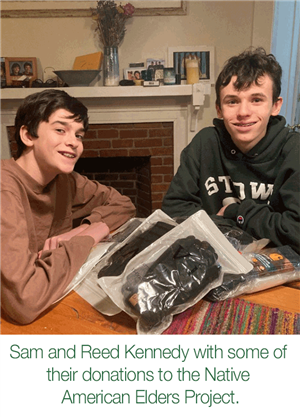 Sam and Reed, who were accustomed to participating in donation campaigns through the Jewish Community Center, noticed that there were fewer clothing drives this year due to the pandemic. Having worked with Afya before, the Kennedys quickly made the decision to start their own campaign.

Supporting tribal communities in Arizona, Utah, New Mexico, South Dakota, and California, the trio found ways around the pandemic to get the gear to the elders as quickly as possible in preparation for the winter season.

“We didn’t want to have a lot of people handling the supplies because of the pandemic,” said Sam. “So, we had gear collected and shipped directly to the warehouse.”

The campaign gave the three teens a new perspective on life.

“I was struggling to stay inside,” said Sam. “But then I realized even though it’s hard for me I am also lucky to be in a house with heating and warm clothes.

Reed said, “It made me realize how we need to be able to give back to people who may not have the luxuries we do.”

For Fingleton, her only regret was that she didn’t think to do something like this sooner. “My biggest hope for the future is that we can do more of this and I can connect to the community more.”

For their part, the Kennedys hope to find other opportunities to collect on behalf of Afya.