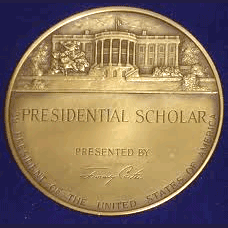 Adam Oppenheimer and Caleb Painter were selected as candidates in the 2021 United States Presidential Scholars Program this week, two of 4,500 students selected nationwide. Nominations are based on outstanding performance on either the American College Testing Assessment or the Scholastic Aptitude Test.

Oppenheimer and Painter placed in the top 99th percentile nationally for their scores on the SAT and ACT exams, respectively. Both candidates said they aimed high on their exams in an effort to get into the schools of their choice.

“Things are getting so restrictive and selective at this point in college,” said Oppenheimer. “I just wanted to put my best foot forward.”

“I wanted to give myself the best chance possible,” said Painter.

This spring, the Commission on Presidential Scholars will name up to 161 Presidential Scholars, one of the highest honors the nation’s high school students may receive. Although Painter and Oppenheimer said they were overjoyed by the acknowledgment, both students said the nominations were unexpected.

“I haven’t really thought about it all yet,” said Oppenheimer. “I’ll be nervous in a couple of months when it gets closer.”

“I didn’t even realize this was a thing,” said Painter. “I had no expectations to even get nominated.”

If circumstances permit, the students selected as 2021 U.S. Presidential Scholars will receive the Presidential Scholars Medallion at a ceremony sponsored by the White House during the National Recognition Program in Washington, D.C. As guests of the Commission, students will receive an expense-paid trip to Washington, D.C., and will attend a series of events held in their honor.

The ceremony has been tentatively scheduled for June 2021, but is subject to change. Oppenheimer and Painter both credited their success in part to the enthusiasm and motivation of their teachers.

“I think the teachers here are passionate about what they do, and it’s infectious,” said Oppenheimer.

For his part, Painter said, “It’s a very supportive community and the teachers are invested in what their students are doing."

Although they will not learn about the final awards till spring, Painter and Oppenheimer are already getting good news as college acceptances roll in.

Oppenheimer, who hopes to study applied mathematics, said “I got good news a couple of weeks ago from the University of Chicago. Now, I am waiting to hear from my dream school of MIT.”

“I got accepted into Harvard,” said Painter. “So, I will be studying computer science there.”

You can find more detailed information about the program on the website at www.ed.gov/psp.