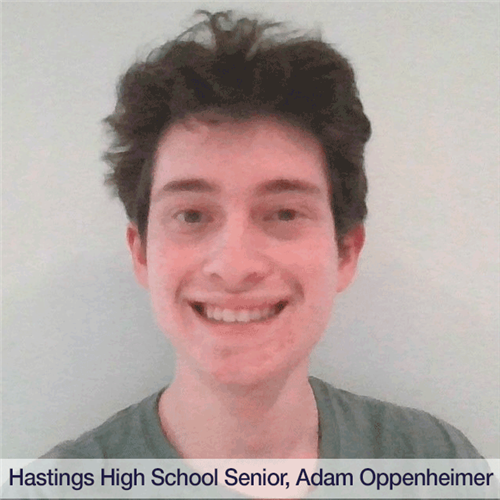 Adam Oppenheimer, who presented his original scientific project, “An Investigation of Blazar Jet Variability through an Analysis of Ton 599,” placed second in his regional room and will have the opportunity to compete at the Upstate JSHS competition sponsored by SUNY Albany in March. He was one of 14 Hastings Science Research students who competed at the virtual symposium along with more than 300 students from the region.

His project focused on the variables behind a blazar, a galaxy with supermassive black holes lying in the heart of it. Blazars irregularly project jets of energy and matter into the atmosphere toward earth at enormous scales of varied length and time. These are called flares. Although scientists are able to analyze the activity, many questions about these anomalises are still shrouded in mystery, which piqued Oppenheimer's interest.

“There’s a lot of scientists who are interested in learning more about them but not much is known,” he said. “They don’t know if there are patterns associated with them or what causes them.”

Oppenheimer first became aware of this outer space phenomena when conducting data analysis at Columbia University for his science research class, where he learned a little bit about how they appear and what is known about them.

“I think the really interesting thing is the scale of these,” he said. “All of these processes are happening on an astounding magnitude much higher in energy than anything we’ve seen on earth.”

His budding interest developed into a fully-fledged research project for class. Working for approximately eight weeks focusing on a specific blazar, Ton 599, Oppenheimer was able to measure variables behind the flares of the blazar with the help of the Fermi Gamma-ray Space Telescope, an observatory in earth’s orbit.

“It’s amazing how things can actually be learned from these incredibly distant sources from something we see from a satellite in the earth’s atmosphere,” he said. “I was able to find numerical limits on things that lie five billion light years away while sitting in my house.”

Although Oppenheimer is no stranger to science projects, having been interested in physics since sixth grade, he was not sure his project would even make it to the top five let alone the top two.

“I was certain there were other presentations that were in the top three for sure,” he said. “It was a great feeling because of all the work I put into it to be able to have it pay off in such a great way.”

Another Hastings High School student, Celeste Paerels placed first in her local room with her project, "Up in Smoke: Recent Influences on Adolescent E-Cigarette Usage.” While Sammy Muench and Atri Ray placed fifth in their regional rooms. With his second place regional win, Oppenheimer will have the chance to compete at the Upstate JSHS competition sponsored by SUNY Albany in March.

As a high school senior pondering his college options, Oppenheimer hopes to focus on mathematics. When asked if he had any interest in a career with NASA, Oppenheimer chuckled and shrugged.