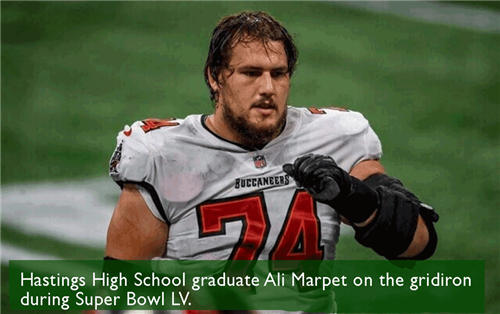 When Hastings High School graduate Ali Marpet took to the football field at Super Bowl LV earlier this month he wasn’t thinking about winning. As an offensive lineman he knows his position is an important part of the Tampa Bay Buccaneers arsenal. A team player since his high school sports days, he passed most of the credit to the rest of the Buccaneers squad for their second Super Bowl championship win.

“I have a job to do so I need to be so focused on what the task at hand is,” he said. “I focused on my job and let Mike Evans and Tom Brady and plenty of those guys do the rest.”

For Marpet, it has been a long and distinctive journey to the NFL, a journey that he believes had its beginning at Hastings High School. Although his talents speak for themselves, he acknowledged the community and school’s influence on his success today.

“I think my path to get here is pretty unique and a very specific set of circumstances,” he said.
“The coaches and my environment at Hastings had a very large impact on that.”

Looking back on his high school years, Marpet recounted how he had stopped playing football in freshman year to focus on a different sport. The surprising move caught the attention of coach Robert McCann who willingly gave Marpet advice on his approach to athletics in school and out.

“I was just going to focus on basketball because that was more interesting and I thought I had a chance of playing D3 basketball in college,” he said. “Mr. McCann convinced me that playing multiple sports would make me a better basketball player and I think that it was bringing me back to football is what led to where I am now.”

For McCann, who never actually coached Marpet on the field, the advice is an adage he uses for his students to this day and relayed all the credit for Marpet’s journey back to him.

“My big thing to all of my athletes is not to neglect everything else,” said McCann. “The nudge from me might have helped but all the credit goes to him.”

During the Super Bowl, McCann and several of Marpet’s former coaches and teachers watched anxiously as he took to the gridiron. Marpet said his path to the top during a pandemic was demanding with playing and practicing while adhering to new regulations.

“There’s been a lot of decisions that I have had to make that weren’t easy to prioritize football,“ he said. ”Specifically with this season, limiting your contact with people and taking COVID tests everyday, sometimes twice a day, it was really a grind for a while.” 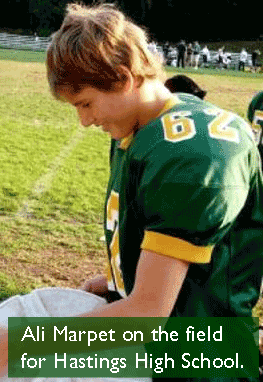 Battling the defending champions, the Kansas City Chiefs, Marpet and the Buccaneers became the victors with 31-9 at the end of the game. With his hard work in mind, Marpet said the pay off was that much more rewarding.

“At the end it feels worthwhile,” he said. “After winning the superbowl you won’t regret working too hard.”

Now a Super Bowl champion, Marpet still looks back fondly on the steps from Hastings High School to the NFL, admiring the uniqueness of Hastings and its tight knit community. For the students in Hastings, Marpet said that many messages come to mind. His advice for any budding athletes back home was similar to that of McCann’s during his freshman year.

“I think that one thing is really relevant is there’s so much specialization in the sport people think that they need to play one sport year-round,” he said. “I’d say play as many sports that are interesting to you, feel what sticks and feel what’s right.”