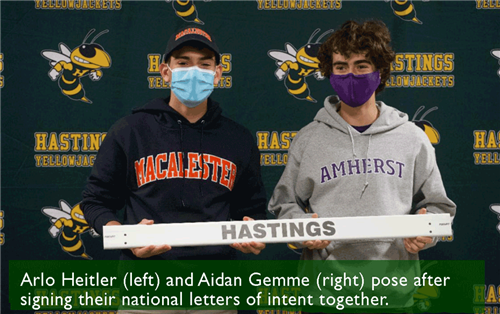 Standing side by side as they have been for the past few years on the track, Hastings High School seniors Arlo Heitler and Aidan Gemme teamed up once again to sign their national letters of intent to run in college.

Heitler, who has been running for Hastings since eighth grade, committed to Macalester College where he will run for the Scots. Gemme, whose recent accolades included the Con Edison Athlete of the Week in December, pledged to join Amherst College’s track and cross country team, the Mammoths. Other than being teammates, the two share a close friendship on and off the track and have rooted for each other for years.

“We’ve been friends for a while,” said Gemme. “He is a very successful competitive athlete and I’ve always kind of admired him.”

In fact, Heitler helped spur Gemme to run for Hastings in the first place. Noticing Gemme’s speed on the baseball diamond during spring seasons, Heitler approached him several times with advice that Gemme would take him up on in his junior year.

“I would just tell him ‘Aidan you should really run,’” he said.

Heitler and Gemme have watched each other progress throughout their high school careers and often held conversations about their future in college athletics. Being such friendly competitors and teammates on the track was a big reason why they chose to sign in a single ceremony.

“We trained together and talked about our goals together,” said Heitler. “It made sense to sign together.”

“It was about being friends, pushing one other, and wanting to support each other’s success,” said Gemme.

Both athletes said their success is in part owed to the support system in Hastings. With coaches like Molly Guilfoyle and Charles Ortiz, Heitler and Gemme have been steadily improving their standings on the track since joining the team.

“Our coaches and co-coaches have been such a positive force since the beginning,” said Heitler.

“They’ve been very successful in creating an environment where the sport is fun for people like Arlo and I who are motivated and want to improve,” added Gemme.

Both students said they chose colleges where they could focus on academics while still competing athletically. 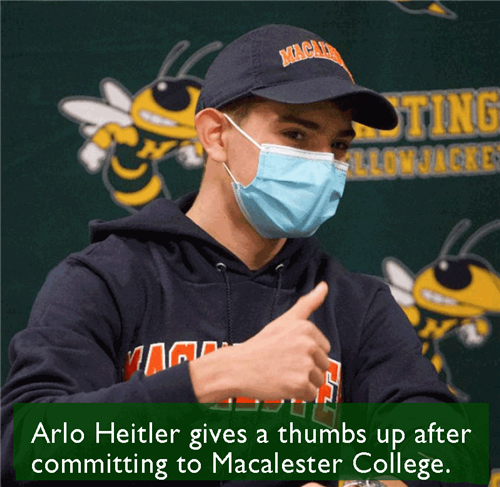 “I realized I could be a student first and athlete second but also be in a really competitive and supportive environment,” said Gemme. “So, I am looking forward to having a team and having that competitive atmosphere where I can pursue some personal bests and keep improving.”

“Macalester had a really cool location and I saw it had absolutely incredible athletic and academic facilities and support,” added Heitler.

Although academics come first, Heitler said he has high hopes for his college athletic career as well and is vying for a very specific spot.

“By the end of my college career my goal is to be one of the lead runners in the country,” he said. “All-American would be a good goal to shoot for and something I am definitely thinking about.”

Now set to take the track for different teams for the first time, Heitler and Gemme joked about the possibility of meeting as opponents.

“It would be really cool,” said Heitler. “That would be quite an experience.”

“Hopefully we’ll still be able to see each other at some competitions on the track,” added Gemme.