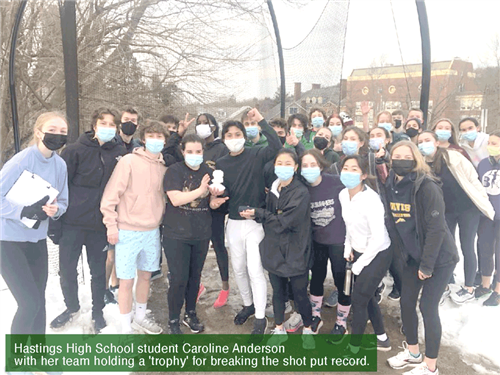 As Caroline Anderson stepped into the shot put ring for her last winter track and field throw as a high school student, she never thought she would be beating a record.

Anderson overshot the 14-year-old Hastings High School record of 28 feet and 6 ½ inches by 1 ½ inches at a meet at the Burke Estate last week. It was a goal the high school senior had been thinking about for quite some time.

“I've definitely been working towards it since freshman year,” she said. “It's always been that mark that I've wanted to hit.”

For Anderson, the meet was her final chance to best the record and it all came down to the last throw. After not making the mark during her first two throws, she began to doubt that she would pass the challenge.

“I had kind of given up,” she said. “I thought there was really no chance, and I was afraid that I was going to foul.”

While other events at the meet concluded, Anderson was preparing for her last throw. As she stepped up for her last effort, her fellow students surrounded her and cheered.

“The whole team started clapping,” she said. “I tried to turn off my mind and not think of anything and I threw the furthest I’ve ever thrown in a meet.”

In the crowd cheering was Anderson’s track and field coach Molly Guilfoyle. Helping along Anderson in her high school career since she started the sport, Guilfoyle wasn’t surprised by the happy ending.

“I knew she had it in her,” she said. “She came in freshman year and knew right away she wanted to be a thrower so it’s something she’s worked towards, getting quicker and stronger over the years.”

Anderson said her pursuit of shot put first started after a Greek festival was held at the school highlighting ancient activities such as shot put and javelin throwing. The festival was where Anderson found her new favorite sport.

“I won the shot put and javelin events, so I realized this might be something I am good at,” she said. “I picked it up and tried it out and I really enjoyed it.”

Going from a Greek festival to a record breaker, Anderson said she owes it all to practice and the guidance of her coaches. As coach of the track and field teams, Guilfoyle is accustomed to her students excelling at meets, but said that Anderson’s journey was certainly one for the books.

“It almost was like a fairy tale moment where everything just kind of came together,” she said. “It was a perfect and great final ending for her.”

Finishing the winter season with a new record, Anderson said she looks forward to spring sports. Usually devoting time to the softball team, Anderson is aiming to focus on field hockey and track for the coming season. She also looks forward to possibly putting her talents to the test in college next year.

“If I end up at a Division III school I’ll try out for track,” she said. “There are definitely a couple of schools where throwing would be a possibility, so I hope to keep doing it.”