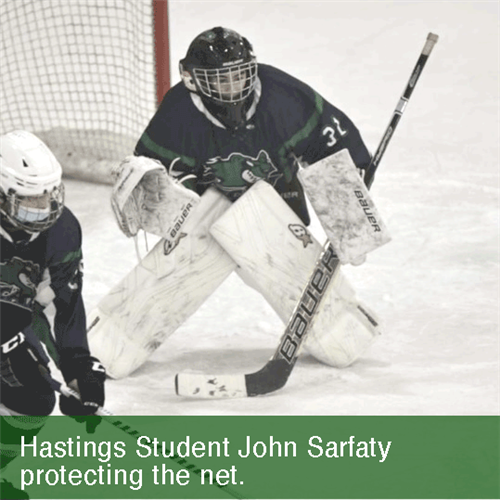 A Hastings High School student is celebrating his first win on the ice this week.

Sophomore John Sarfaty helped the varsity ice hockey team, the Ice Cats, claim their first win for the season on Tuesday after facing off against Fox Lane High School. For Sarfaty, the team’s goaltender, it was all the more appreciated as it was also the first win of his varsity ice hockey career.

In their third game of the season, the Ice Cats, a team comprising students from Briarcliff Manor, Pleasantville, Hastings, Westlake, and Valhalla, came out on top with a score of 12-5. For the player in one of the hardest positions of the sport, and the only player from Hastings, Sarfaty wasn’t paying attention to the pressure.

“This wasn’t our first game, so all the nerves are gone,” he said. “You can’t focus too much on the fact that you’re going into a game, you just have to focus on one shot at a time.”

Although the scoreboard told the tale of the Ice Cats’ victory, Sarfaty said his experience of the game wasn’t as clear.

Far from a stranger to the ice, Sarfaty has played hockey since he was nine years old. Starting as a forward in the sport, Sarfaty excelled at his position until when one day his hands found the goalie pads.

“I found the gear to be really cool, so I thought I’d try it and it started from there,” he said. “I love strapping on the gear and facing the shots.”

Now in his first year of varsity ice hockey, Sarfaty is appreciative of the achievement but said that he isn’t focused on the final score when he is out on the ice.

“We’re not looking to win this whole league or anything,” he said. “We just want to play to our best ability and win each period at a time.”

Working alongside students from different school districts, Sarfaty said it doesn’t take away from being part of the same team. Although an Ice Cat during game time, Sarfaty said he is also proud to represent Hastings High School in the net.

“At the end of the day, it feels good for each of us to do our part for the schools we go to,” he said.