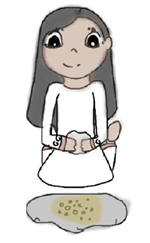 Farragut Middle School students stepped back in time for an assignment on the Aztecs, giving some students a chance to show their creative sides.

The entire fifth grade social studies section was assigned to research a person of the Aztec culture and develop a cartoon around their daily life.

“After learning about the Aztecs, this was a fun way for them to jump into the point of view of one of them,” said teacher Lisa Kilion.

For many of the students, stepping into the shoes of an Aztec warrior or priestess in the 13th century might be hard, but for fifth graders Isabella Reiter and Vivienne Guevin-Gill, the assignment grew into a story book.

“I learned a lot about the Aztec culture and how they lived their lives,” said Reiter.

Choosing a female Aztec commoner as their subject, Guevin-Gill and Reiter tracked their main character throughout a day in her life including activities like grinding corn and cooking tortillas. After receiving the finished story, Kilion noticed the images accompanying each page had a similar style. The similarity was because the images all had the same artist: Guevin-Gill.

“I asked her ‘where did you find these amazing pictures?’” Kilion said. “I thought that she had gotten them from the internet.”

While Reiter was in charge of the writing, Guevin-Gill worked on the illustrations. She had to digitally illustrate two images per page in a short period of time to complete the assignment.

“It was a lot of work pumping out the drawings non-stop,” said Guevin-Gill. “I had 14 to 16 drawings to do in a couple of nights.”

Although the drawings were time consuming, Guevin-Gill was able to approach the task with a simple system to keep the project on track.

“I went for a cartoony style,” she said. “I like making it simple when I have to draw the same thing over and over so I don’t make my drawings too complicated.”

For Guevin-Gill, the hard work certainly paid off after receiving the praises of Kilion as well as her classmates. While the illustrations jump off the page, Kilion also gave praise to Reiter’s writing.

“There’s definitely a sophistication to the writing,” she said.

Using what they learned in class about the Aztec culture, both students were able to add to the assignment in their own ways. But it did come with some difficulty as they struggled at some points.

“It was really hard for me to think of things for the character to do on all the pages,” Reiter said. “But I was trying to think like our character would so it would be easier for me to write.”

As part of their curriculum, fifth graders learned about the Maya and Inca cultures as well as the Aztec. While this assignment was a good example of some of the creativity of the students, Kilion said it is a regular occurrence in her class.

“My class is very project oriented,” she said. “We’re keeping the students excited and inspired.”