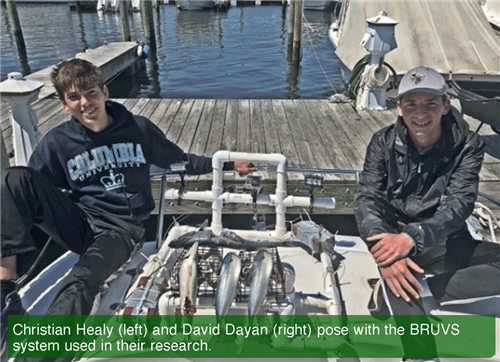 David Dayan and Christian Healy, of the Hastings High School class of 2019, and their mentor Dr. Craig O’Connell had their work published this month in the Marine Technology and Society Journal.

Their paper, “The Use of Baited Remote Underwater Video Systems (BRUVS) to Noninvasively Characterize a White Shark (Charcharodon carcharias) Nursery Area off Eastern Long Island, New York,'' will help determine that the area meets the criteria of a nursery. Their findings could spur conservation efforts to protect the white shark population.

The students began their foray into science in Melissa Shandroff’s science research class. When Dayan learned that Dr. O’Connell, a mentor, was working on a project involving animals, he immediately enlisted himself in the effort.

“These animals are really important for the health of ecosystems and they're an apex predator,” he said. “This area is important for the juveniles to survive and grow and contribute later to the overall population, so we were looking to see if that area was fostering their growth.”

However, when Dayan was told he would have to watch hours of underwater footage for his part in the research, he realized that he might need a little help. That’s when Healy came into the picture.

“When we were originally looking for projects we both wanted to do something animal related,” said Healy. “It sounded like the perfect opportunity for me and it was in line with both of our interests.”

Although Dayan and Healy were excited, capturing footage of the ecosystem without disturbing its inhabitants was no easy task. Using BRUVS, a system that allows observation of marine life without invading their habitat, the research was able to produce approximately 1,348 hours of footage - footage for Dayan and Healy to monitor minute by minute.

“I think we got into a groove at some point, but it was definitely difficult towards the beginning,” said Healy. “I actually kind of enjoyed it as a therapeutic process to just take your mind off of everything, listen to music, and watch whatever was going on down there.”

Of course, the therapeutic process was put on hold whenever a shark came into view.

“You never know what's going to happen or what you're going to see so there's like a little bit of a thrill,” said Dayan. “Especially when you see a shark.”

For Dayan and Healy, watching the footage was particularly satisfying given they had built the observational devices in their classroom by hand.

“After school one day we just started building them and then in class, we would be sitting off in the corner, screwing together PVC,” said Dayan. “Building it was a nice hands-on start.”

While the work was exciting, they did have lulls staring into the wide open ocean. To stay motivated, they kept the goal in mind.

“I think both of us have been interested in marine life for a good while,” said Dayan. “But for this project, having an understanding that there was a clear conservation goal in sight was nice for both of us and to have a clear purpose throughout.”

For Healy, his personal love of the ocean goes even farther back than his days in science research class.

“I had always loved going to the beach when I was younger and looking through tidepools with my sisters and finding crabs and minnows,” he said. “This project was just a huge next step in my own interactions with the ocean.”

With their finished work now published in a scientific journal, Dayan and Healy are happy to look back on the experience and reel in the accolades.

“Seeing it all the way through was a great opportunity,” said Dayan. “There's definitely some endorphin rush to seeing your name in a properly formatted journal, there's just something really nice about that.”

“It's great to have completed this project because it's something we've been working on for a while and to get recognition for what we were doing is really nice,” added Healy.

For Healy, who is pursuing a double major in environmental science and film at Northwestern University, it is likely that he will be watching footage like this again.

“My goal is to get a grant to create a mini-documentary on an ecosystem in Washington State,” he said. “It's a perfect case study to see what happens when you get rid of a dam and you have tons of land that was underwater years ago. So now, animals are returning.”

Dayan, currently studying animal science at Cornell University, not only plans to learn more about animals - he wants to treat them as well.

“I'm hoping to be a veterinarian particularly with wildlife,” he said. “The field of wildlife health is something that I'm passionate about and hope to pursue.”

Both published researchers acknowledged that none of it would have been possible without the science research class at Hastings High School. The class led them to the opportunity, but also prepared them for it.

“It speaks to the success of the science research class that never once during this process did I feel overwhelmed with all the work we had, “said Healy. “It's a nice structure to get somebody from essentially not knowing anything about any of these fields and never doing anything of this nature to then being published.”

“The great thing about the science research class is that it provides an in-school avenue to explore anything,” added Dayan. “The ability of the class to make something like this feasible at all is amazing.”