On St. Patrick’s Day, everyone wants to have a little luck o’ the Irish. In Marykate McCabe’s kindergarten class, students were trying to use a bit of that luck to catch some sneaky leprechauns.

A pint-sized door appeared in McCabe’s classroom in the beginning of March indicating their new visitors were dropping by for St. Patrick’s Day. While the students searched high and low, the leprechauns were nowhere to be found. The leprechauns made sure their presence was known each night by leaving students a special treat in their lockers, but that is not all they left.

“They walked around and left tiny little footprints and glitter,” said Stella R. “They left me something that made me happy because glitter is my favorite thing.” 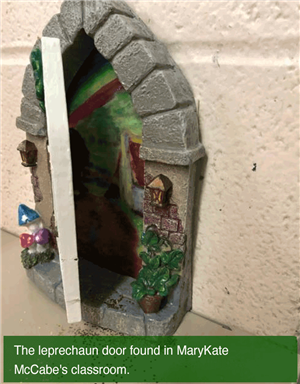 The students were told that the leprechauns would be leaving after the holiday, so the students decided to try to get a better look at their green friends before then. Hoping to see one of the sneaky creatures in action, they devised a plan to snatch one. Using some quick critical thinking, the class read some books about different ways to get a hold of one of the folklore legends.

Although their door was missing, the leprechauns left a little something behind for the students in McCabe’s classroom.

“The leprechauns made the bathroom water green and with glitter in it,” said Lex M. “All of us were like ‘woah, how did the leprechauns do this.’”

Finding green footprints all over, the students could see the leprechauns were up to something the night before. Searching the classroom, the students found tiny leprechaun hats left behind along with bags of lucky charms cereal they can take home with them. The students were also able to take home some leprechaun gold glitter trapped in little jars.

With glitter and green covering McCabe’s classroom for the holiday, the leprechauns delighted the students but unfortunately made some enemies as well.

“The custodians do not much like the leprechauns,” McCabe said. “They will have to get more than Irish soda bread this week to make them happy, we will have to leave treats later for them.”

Students were told that although St. Patrick’s Day is over, the leprechauns may return and visit them again sometime in the future.