Through the Hoops with Hastings High School's Melannie Daley 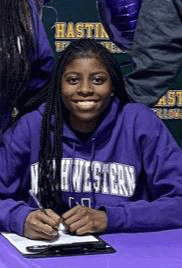 Hastings High School girls basketball player Melannie Daley hasn’t had much time to focus on the accolades she received this season. With the first Hastings girls basketball title now under her belt, she is taking time to reflect on her accomplishments.

The season started strong this year with Daley and her team pushing past their competitors to the finals last Saturday with a record of only one loss out of nine games. Facing off against Pleasantville in the Southern Westchester Group 3 title game, Daley said her team was going big or going home.

“We came into the game very excited,” she said. “Every year we kept saying we were going to win a championship, so it has been building up.” ]

Coming out on top with a score of 68-52, the Yellow Jackets were able to celebrate their first championship win in history. By the sound of the buzzer, Daley had put in 29 points toward the final score. Although the season was abbreviated and the name of the actual title is still to be determined, Daley said it didn’t matter much to her and her teammates.

“After winning on Saturday, I didn’t care what we won, whatever the title is called it’s going up on a banner in the gym,” she said. “I can look back in 20 years and say that I was here for that.”

As captain of the team for the past two years, Daley emphasized that she only played a part in the success story for the Yellow Jackets. She maintained that her preparation for each game is thinking not about herself but about her teammates.

“It’s important to put the team first before yourself,” she said. “I go into a game thinking I want to do whatever I can to help my team and I get on the court and I do it.”

Although it's her first title win, Daley has had many accomplishments. She was named Con Edison’s Athlete of the Week and Rivertown Enterprise’s Girls Basketball Player of the Year this past week. Although she admitted the attention can sometimes be a little overwhelming, the Hastings High School senior said that she was glad her hard work is paying off.

“I’m excited that I won, it’s really cool,” she said. “It’s amazing to know that everything I put in is now being shown and people are watching that.”

Daley said her success was due in part to the excellent coaching staff at Hastings.

“I’m happy I’ve had the experience I’ve had at Hastings,” she said. “It’s helped me be a better player but also a better person and leader.”

Looking forward to the future, Daley plans on bringing everything she learned beyond Hastings High School. Having signed her intent to play college basketball for Northwestern University in December, Daley feels ready for the next step. A step that will hopefully be the beginning for her on the court.

“I can’t wait,” she said. “It’s been a dream school of mine but beyond that I do want to play in the WNBA.”

Although, it isn’t all about basketball for Daley. In her time off the court, Daley participates in a number of charities varying from donating food to the homeless and teaching youths some basketball skills. While the WNBA is a goal, Daley’s other plans align closely with her passion for charity.

“I plan on majoring in biomedical engineering,” she said. “I’ve wanted to make prosthetics for athletes who have lost a limb for a long time so I might work on that after the WNBA if I make it.”

For now, Daley is celebrating the championship win while it is still fresh in her mind. With her last year as a Yellow Jacket coming to a close, she is happy she can end it on a high note.

“To win that for Hastings was amazing and to do that in my senior year was like a dream come true,” she said.