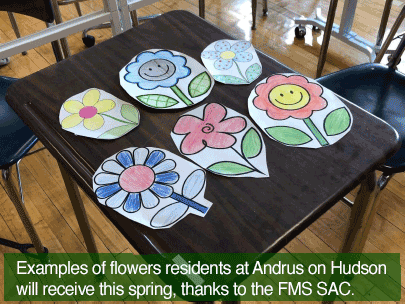 While most students are enjoying spring’s warmer weather, the Farragut Middle School Student Advisory Club is starting campaigns for charity.

The club consisting of seventh and eighth grade students started two campaigns this past week to aid local charities. Their spring salutations campaign will send some much-needed cheer to Andrus on Hudson, a senior living facility in Hastings, by delivering them some homemade flowers.

“We were thinking in terms of spring and helping people,” said SAC member Sienna Radley. “So, we came up with these flowers students can color in and write messages on to give to the residents.”

Rather than the real thing, residents at Andrus on Hudson will be treated to a hand drawn flower with an encouraging spring message. The effort is the first of two campaigns geared toward giving back to the community, with the other being a toiletry drive for local kids in need. Working with the Sharing Shelf, a non-profit founded to provide clothing and other essentials to low-income youth in Westchester, the club collected toiletries for at-risk youth, a group they feel a special connection with.

“We know what they’re going through,” said SAC member Jack Maney. “We’re the same age group and have that sort of connection.”

“We’re very fortunate, but right now there are kids who don’t have these resources or access to these things,” added faculty advisor Gina Marie Bellavia.

Bellavia said she thought she would have to remind the students of the need for charity during times other than the winter months. But she was pleasantly surprised.

“This group of kids doesn’t think about planning activities that are fun for them, they plan activities that give back to others,” said Bellavia. “I think that it says a lot about them.”

Meeting with the club each week brings a refreshing look at how the students prioritize others over themselves, not only during times of crisis but in general.

“Every time we have a meeting they have ideas,” she said. “They’re just excited about doing kind things, it’s really nice.”

For the SAC members, campaigns such as the toiletry drive and spring salutations aren’t only ways for them to do kind things for the community, it’s a way to do something kind for themselves as well.

“I think it also helps us,” said SAC member Tessa Rooney. “Helping a person and being generous helps our mental health and can make you feel better about yourself.”

“That feeling of helping someone, it’s like a ripple effect and it feels incredible,” added Radley.

“The club is something to look forward to every Friday and doing great things to help people,” said SAC member Kylie Vulpone.

“It makes the world go round,” added Maney. “If we have to be the ones to put that extra effort in, then so be it, we enjoy doing it.”