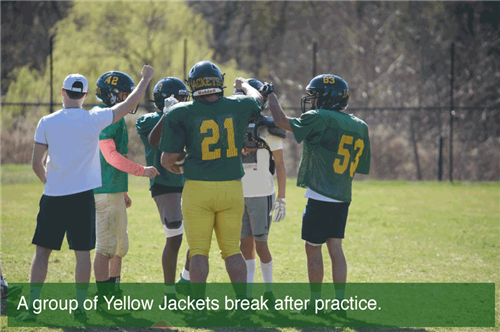 Walk by the football field at Hastings High School any day of the week and you’ll find the Yellow Jackets practicing diligently. You’ll also find the team shouting ‘hard work’ every time they break from a huddle. Maybe that is because hard work is exactly what they’ve put into the game so far—and it is beginning to show.

With a record of 3-0 coming into week four of the season, the Hastings High School team has come out swinging. Members of the team said it is no coincidence that they have put in the extra effort this season.

“We’re hungry,” said middle linebacker Johnny Amaral. “It’s a little personal for many of us.”

For Amaral and many of the Yellow Jackets pumping out good plays isn’t just personal, it's also a last shot at redemption.

“This is a senior-heavy team,” said head coach Sam O’Hare. “A lot of them are returning players and have been working hard.”

For O’Hare, this is his first year as head coach of the team, and under the circumstances of COVID-19 he is glad his team has stepped up against the odds.

“It was tough not being able to get their bodies ready at the beginning of the year,” he said. “But so far we’ve been great.”

Facing Albertus Magnus High School for the home opener, Hastings won 7-0 on a 30-yard touchdown pass in the final minute. Keeping up the momentum, Hastings took on Irvington, leading to their second victory with 14-0. Week three saw the Yellow Jackets jump ahead of Croton-Harmon with a score of 40-12, giving Hastings its first three consecutive wins in nine years. 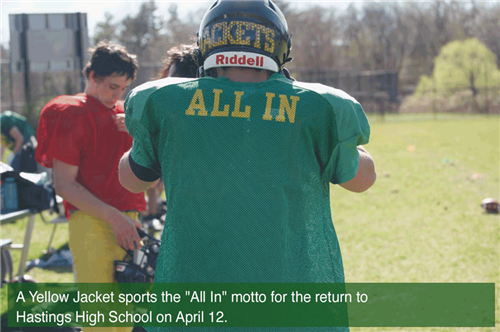 “It’s been going great, the team is mostly returning seniors so we’ve all been working hard,” wide receiver and safety Chris Capuano.

With three wins and no losses under their belt, the team is gaining confidence but have yet to start to celebrate. The team hasn’t seen a lead like this since they began playing. The last time Hastings had a record of 3-0 was in 2006.

“We’re tired of even our friends asking ‘how much are you going to lose by?’” said Amaral. “It just makes us a little hungrier.”

The team took on Briarcliff/Hamilton Saturday at Briarcliff High School with a score of 26-8. Although Briarcliff came out on top of the Yellow Jackets, players said they will not be deterred in their determination to be winners.

“We all have a little something to prove,” said Amaral. “To ourselves, to our families, to our friends, our community.”