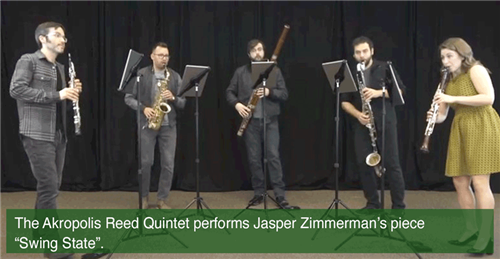 As part of the National Association for Music Education’s 2020 Student Composition Competition Concert, seventh grader Jasper Zimmerman’s original composition “Swing State” was performed live by the Akropolis Reed Quintet, an award-winning ensemble, along with five other student works. Zimmerman’s piece, which received an honorable mention, was one of only three from grades K-8 to be recognized and one of only two from New York. Zimmerman said to hear his composition rendered into a live performance was an experience unlike any other.

“It was really interesting to hear and see my piece performed live,” he said. “Before I had only heard it on instruments from a computer which don’t sound close to being performed by actual people so it was really cool.”

The Akropolis Reed Quintet, which has won seven national chamber music prizes since 2011, performed the six winning works live through Zoom and were able to interact with each winning composer one-on-one before and after the premiere of their own piece.

“I talked about the piece with them and got to know them which was a really great experience,” Zimmerman said.

For “Swing State,” Zimmerman said he drew on multiple sources for inspiration, which led to its eclectic and upbeat style.

“I love to listen to the big bands, 1930s and 1940s music and marching music,” he said. “There’s all different types of genres that I tried to put in this piece.”

On the heels of watching his original composition come to life professionally on the stage, Zimmerman said he is not taking any time to slow down in terms of composing and is hoping he will watch one of his pieces performed live once again in the near future.

“I’m actually working on the submission for next year's contest,” he said. “Instead of reed quintet it is for saxophone quartet and it is pretty different.” You can listen to the Akropolis Reed Quintet’s rendition of “Swing State” here.