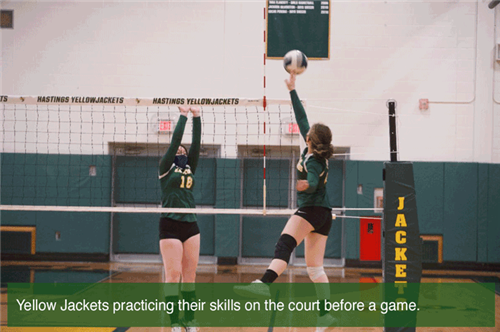 With the final week of the girls varsity volleyball season already underway, the Yellow Jackets have hit their stride and are looking to finish the season on a high note.

Facing off against Edgemont High School on April 16, the Yellow Jackets finished with 0-3 against the Panthers. The loss puts their record at 5-8 this season so far. The loss follows a strong win over the Woodlands High School Falcons on April 14. Players on the team said their season, although coming to a close, is something they haven’t taken for granted.

“Everything is going really well,” said senior Jessica Higgins. “We pick each other up more and have grown closer as a team this season because we really appreciate getting to have a season at all.”

“To be able to play with the people that we have been with all these years and not miss out on our senior year means the world to us,” she feeling for someone else who has been part of the team for the past five years—their coach. 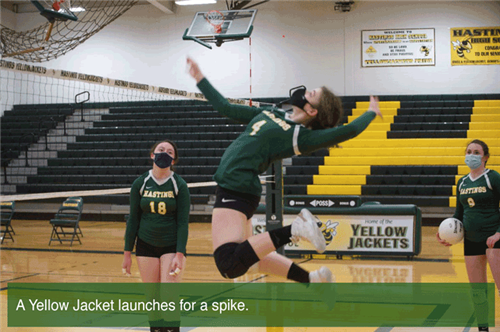 “It’s been really nice to see our program work itself through the system,” said Coach Emily Kehoe. “To see their progression as players from modified to varsity, I’ve been waiting for this group to get to this point this year.”

For Kehoe and much of the team, the season has been intense with the past week seeing five games in six days while a normal season would have around two or three during that amount of time.

“In the summer and the fall we were unsure of what was going to happen so we’re just grateful for every day we get to play volleyball,” she said. “And we’ve been pedal to the metal from minute one and have plowed through until playoff time.”

Although the season was abbreviated, Kehoe said she could definitely see improvements on her team and with a record of 5-8 so can everyone else.

“It shows that we’re not the best team in the section but we’ve made a lot of progress in the program,” she said. “We’ve been consistently getting better and that’s all you can ask for as a coach.” 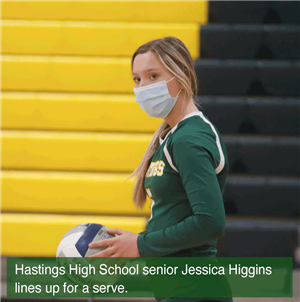 While their record speaks for itself, Kehoe said that it also speaks for the entire team’s devotion to the sport and to each other in an uncertain time.

“They’re a very good group of leaders and volleyball players,” she said. “Just to come in with a few weeks’ notice and pick up and jump right into a season, I give these kids all the credit in the world to deal with that.”

“It’s been super successful and I’m very proud of them,” she added.