Furry Friends at Farragut Middle School Get the Spotlight 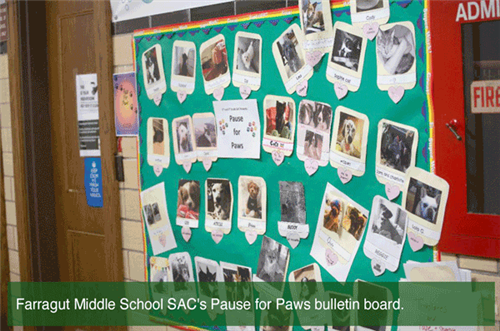 Some of Farragut Middle School’s furry friends are getting showcased this month.
Pause for Paws, a campaign by the fifth and sixth grade Student Advisory Club, is inviting students to post photos of their pets on designated walls of the middle school. The campaign is already causing middle school students to stop in their tracks to admire their classmates’ pets.
“It's so adorable,” said fifth grader Jennifer Schofield. “My favorite one by far is Arthur, because he’s a rabbit and not a dog.”
For the creators of the campaign, such as SAC Advisor Shari Kavanagh, the message behind it all is very simple: to take a second to smile.
“One of our missions this year was to raise school morale and this was about making people smile, be happy, and get to look forward to something to see in the halls.” she said. “Kids love animals and their pets and we thought it would be great to let students share them.”
The Pause for Paws campaign not only brought animal-loving students together, it also highlighted students whose pets are the kind that wag their tails.
“I heard some kids saying ‘oh, I didn’t know you had a chicken, I thought I was the only one,’” she said.
With chickens, rabbits, and hamsters decorating the walls, the students were abuzz with compliments. As students discussed the similarities between their pets, Kavanagh found they were also discovering other interests they have in common.
“We find that children connect through pets.” she said. “So, this is a way for some students to get to know each other in a way that maybe they didn’t know before.”