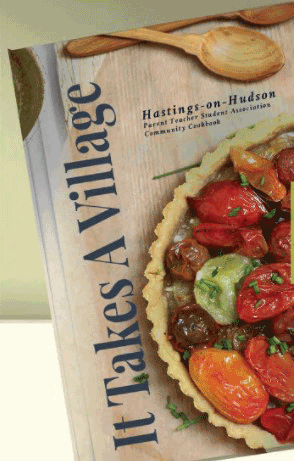 The Hastings-on-Hudson PTSA has begun accepting pre-orders for its first-ever community cookbook, “It Takes a Village”. The 200-page book will feature recipes submitted by community members, parents, and students.

“I think it's a cool idea because in quarantine a lot of people picked up cooking like I did,” said Hastings High School junior Connor Noyes. “It could be fun to discover a whole bunch of new recipes from people you might know.”

Noyes is no stranger to the kitchen, having picked up a few pointers from his mother. In fact, Noyes’ mother laid the foundation for his scalloped potatoes recipe, which will be included in “It Takes a Village. ''

“I’ve grown up eating it, it was always one of the special things my mom would make for the holidays,” he said. “It’s just one of those homemade dishes that I’ve always loved.”

Noyes felt his scalloped potatoes recipe was a simple but out-of-the-ordinary dish and wanted to share it with his community.

“It will definitely be cool to see the recipe published,” he said. “But I think I want to try out a bunch of recipes and maybe give one of my friends' recipes a try.”

The cookbook’s creators were happy to see the many cultures of the Village of Hastings-on-Hudson represented in the book.

“I think the cookbook just shows the diversity of cultures here in Hastings,” said PTSA member Jenny Ayres. “From the Scandinavian recipes to the Italian recipes, it's just a wonderful kind of insight into living in Hastings.”

Ayres, along with PTSA members Robin Muskin and Kate Sonders Solomon, began compiling recipes for the book in November. In addition to encouraging cultural favorites, the group accepted recipes from cooks with a wide range of abilities, from students just learning their way around the kitchen to professional chefs in area restaurants.

“We thought it was fantastic because we had never done it before and it was such a nice community oriented thing to do, especially during the pandemic,” said Muskin.

“We made sure to get a wide range of people to contribute so it would be special to everyone in the village,” added Sonders Solomon.

Sonders Solomon, a professional cook with experience in compiling cookbooks, said “It Takes a Village” is unlike anything she has seen before. She praised the quality of recipes as well as the book’s overall presentation.

“This is completely next level,” she said. “There's a consistency in this cookbook that doesn't exist in other family and community cookbooks in terms of the recipe writing and there are a lot of beautiful photos.”

Those photos, much like the recipes that accompany them, were submitted by Hastings residents, some of them from students learning their photography skills in school.

“It was super cool to find out they were being published,” said freshman photography student Erin Lobovsky. “We pre-ordered our copy.”

While residents anxiously await the arrival of their copies, the creators said they hope the book will become a collector’s item that can be passed from one generation to the next.

“It’s definitely something that kids may end up inheriting if their parents buy a copy,” she said. “I could see them taking it through their life like an heirloom.”

You can pre-order “It Takes a Village” here.