Two Hastings High School clubs are teaming up for a student art fundraiser this week. The Hastings High School Amnesty International Club and National Art Honor Society are set to kick off a virtual art fundraising event on April 29. The event will include live music from student musicians as well as a silent student art auction. While the event will showcase student talent in Hastingson-Hudson, the real goal is to help others.

“All the proceeds are going to go to Eternal Nation, which is a charity that provides medical care to everyday people who have been affected by the Armenian-Azerbaijan war,” said President of the Amnesty International Club Cayla Ossen-Gutnick. “This conflict has been going on for years, it is historical and our goal is to raise $1,000 by June.” 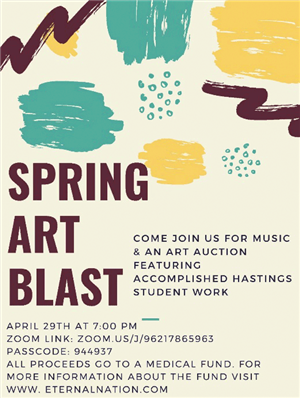 The projects of the Eternal Nation Foundation range from short-term actions in response to a specific urgent need, to long-term restorative healthcare services relating to the conflict, which most recently saw an uptick in fighting in 2020.

“A lot of people are really suffering over there and coronavirus is a big thing there as well,” added Ossen-Gutnick. “People were losing their homes, being forced out and it was just crazy.”

For Ossen-Gutnick, the cause became close to her heart after finding out a family friend had a personal connection with the conflict.

“I have a really good family friend and she asked if we could help fundraise for this cause because she is Armenian,” she said. “I told her that I would bring it up to the club and we got together and decided to do something.”

While the club searched for a fundraising idea, Painter and NAHS member Jasper Lincoln suggested combining efforts with the NAHS for an auction featuring student art and music.

“I thought that this might raise a lot more money than past events since we are getting more departments involved,” said Lincoln.

“I think it's a great combination and a really great idea to do it,” added Painter.

“We’re asking members in art to submit pieces they’re proud of,” said Painter. “It will recognize their art’s value and all the hard work they put into it and also support the charity.”

“It helps them get some recognition. Many of these artists are quite accomplished and have won awards in the past,” added Lincoln.

As they await the fundraiser’s opening night, the members of both NAHS and the Amnesty International Club are already proud of their efforts.

“We all made it work together,” said Ossen-Gutnick. “Now, I would love to see a bunch of people show up so it raises a decent amount of money.”