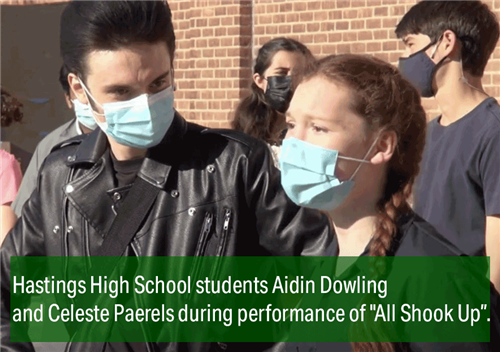 The Hastings High School play has been shaking things up this week.

For the past year, schools in Hastings-on-Hudson have been holding theatrical performances virtually with much success. Hastings High School’s newest musical, however, has paved the way for other productions to hold in-person shows.

“All Shook Up” held two outdoor performances last weekend at Hastings High School to a socially distanced crowd of approximately 80 people. The musical was held in the school's courtyard where circles spaced six feet apart marked where guests of the cast and crew could watch the performance live and in-person.

“I’m really glad we were able to do as much as we did,” said senior Celeste Paerels. “Doing something in the theatre is a different experience; it was kind of like “Shakespeare in the Park”.”

Inspired by, and featuring, the songs of Elvis Presley, “All Shook Up” saw the cast dressed in 1950s attire for their performance consisting of both singing and dancing under the sun instead of stage lights. Although the musical marked the first in-person concert in more than a year, cast members said the production had its challenges.

“I got my fair share of sunburns,” said Paerels. 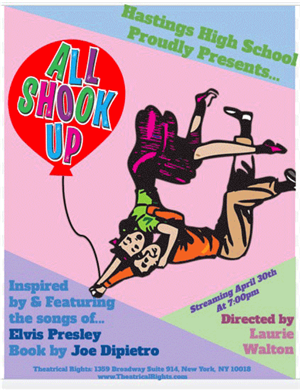 For Dowling, who has been performing since sixth grade, putting on a show outdoors was a first. The actors learned the musical numbers and choreography quickly but doing so while battling the elements was a new experience.

“One thing I realized was how much easier it is to lose your energy outside,” he said. “When you’re on the stage you’re totally separated from the crowd.”

Although the audience for the live performances was limited, the shows were filmed and an edited version premiered virtually on Friday. For the actors, watching their work premier virtually will not be new—but watching how they performed live in front of an audience will be.

“Watching myself will be interesting,” said Paerels. “I think getting to see myself perform will help me improve so it will be cool.”

“I’m a little terrified of watching myself,” added Dowling. “I have no idea what I sounded like.”

Having completed their first in-person, outdoor production, the coordinators of the show said the sky is the limit for future productions.

“It gives us a lot more performing opportunities and alternatives to what has been traditional for us in theatre,” said Director Laurie Walton. “If we wanted to do a smaller, student-driven thing outdoors, we now realize that’s possible.”

You can watch “All Shook Up” here.