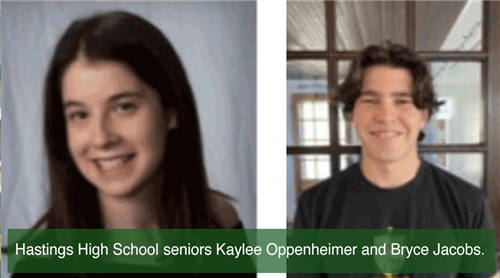 Two Hastings High School students have earned their spots to present at a prestigious international science fair next week.

Hastings High School seniors Bryce Jacobs and Kaylee Oppenheimer have been selected to present their projects at the Regeneron International Science and Engineering Fair where they will compete against 1,800 students from more than 75 countries around the world for $4 million in prizes.

Both students participated in the Regeneron Westchester Science and Engineering Fair held virtually in March. Hastings High School was among 44 high schools and 550 students who competed. Jacobs and Oppenheimer, and 18 others, were chosen as top finalists.

“It’s never happened before in Hastings history where we’ve gotten two students to go to ISEF,” said Oppenheimer. “People come from all over the world for this and it is just exceptional.”

“I’m so happy and honored to have been able to study this,” said Oppenheimer. “I went outside my field to better understand what I wanted to do with my project.”

While Oppenheimer became acquainted with her line of study, Jacobs had his eyes on the sand. His project, "Examining the Predatory Relationship Between the Invasive Green Crab (Carcinus maenas) and the Indigenous Blue Mussel (Mytilus edulis) in Jacobs. “So, I was really just interested in what was causing their proliferation and what it meant for Maine and its ecosystems.”

Whether studying DNA sequences or sand crabs, both students credited their science research class at Hastings High School headed by Melissa Shandroff for their success in the competition.

“The science research class has really helped me,” said Jacobs. “Pretty much every step of the way from coming up with what I wanted to research to choosing which data analysis method to use, I've had class time and Mrs. Shandroff’s advice.”

“I’ve had the best science research teacher in the world and so many people to call my mentors,” added Oppenheimer. “So few people get that support and one of the things I’ve realized is how lucky I am to have people who want you to be passionate.”

Both students are preparing their projects for the big day when they will be judged by a panel of professionals from around the world across an array of scientific disciplines. Although they are slightly nervous about the competition, they are more excited than anything.

“Everybody has this energy and is so happy to be sharing science,” said Oppenheimer.

“I'm definitely looking forward to meeting the judges,” added Jacobs. “There are so many projects out there from around the world that are going to be really fascinating and getting the chance to see those will be really special.”

Judging for ISEF will take place from May 3-6 via video conferencing. Winners will be honored during a virtual awards ceremony held May 16-21.

You can find the complete list of WESEF winners here.