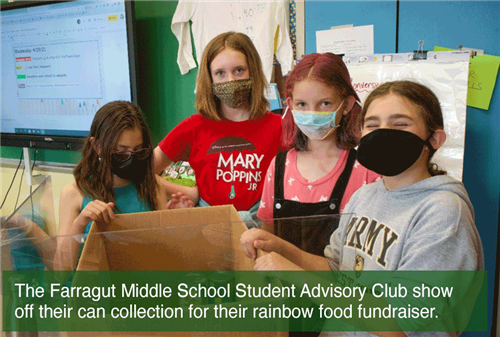 The Student Advisory Club is getting colorful with charity.

The club is asking Farragut Middle School students and their families to donate canned goods this month to help Hasting-on-Hudson residents in need. The so-called Rainbow Fundraiser is putting a colorful twist on donations by collecting cans with red, yellow, blue and green labels.

“Hopefully families of the middle school can donate a bunch of non-perishable foods and we can get all of the colors of the rainbow,” said club member Trinity Wiese.

While trying to collect all the colors of the rainbow is fun, members of the SAC said the real goal is to get as many cans as they can for their community.

“It’s so we can help people in need that don’t have as much,” said club member Ella Tadmor. “These are non-perishable so they can have it set aside for a very long time.”

With cans beginning to line the bottom of boxes located outside the middle school office and two classrooms, club members hope to keep collecting the colors until all three boxes are filled to the brim by the fundraisers end on May 14. Whether they are able to represent all the colors of the rainbow or not, the members said they still feel a sense of accomplishment from starting the food fundraiser regardless.

“It makes me feel good because I know I am helping Hastings families,” said club member Roxy Griffin.

“I feel proud because we’re collecting to help people in need,” added Wiese.

The fundraiser will mark SAC’s final event before the summer break, but club members said they will be back next year with more projects.

“It's really fun because you get to experience helping the community,” said Tadmor. “We get to do stuff around school but we also do food drives like this that go towards the entire community.”