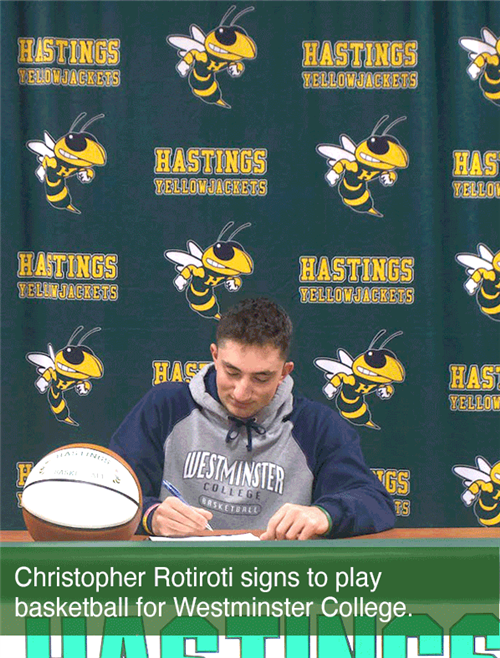 A Hastings High School senior put the pen to the paper this past week and committed to playing basketball in college.

Christopher Rotiroti officially signed his national letter of intent to play basketball for Westminster College on Tuesday. Surrounded by his family and coaches, the college-bound athlete said that he was happy to end his sports career at Hastings on a high note.

“I’m really proud,” he said. “When I was younger I would look up to a lot of athletes from Hastings, and one of my goals was to win championships. I’m proud of what we have been able to do.”

Playing point guard for the Yellow Jackets for his entire high school career, Rotiroti said his decision to pledge his talents to the Division III school was not difficult because of one thing: it reminded him of his hometown.

“It really reminded me of Hastings a lot; it was a nice family place,” he said. “When I met with some of the players and coaches, I felt like I could really fit in.”


Playing sports in Hastings since he was in first grade, Rotiroti said his focus jumped back and forth from football to basketball. It was the court, however, where he felt the most comfortable.

“Ever since I was young, basketball has been the one sport that has really stuck out to me,” he said. “Even though I love other sports, it will be great to see my true potential and how much better I can get.”

For Rotiroti, getting better at the sport is one of the goals that drives him to play his best on the basketball court. Another is proving he has what it takes to play the game. Starting high school as a “small and skinny freshman” and being overlooked gave Rotiroti the push to increase his performance steadily throughout the years.

“It fuels me to play harder and prove to people that I can play with them,” he said.

While Rotiroti anxiously awaits his debut on the court at Westminster College, the high school senior said he can sit back and savor the moment, with his decision now set in stone.

“It was such a relief to sign,” he said. “Even though I had already decided on the school, it just felt good to cement it in and know for a fact that I was going to Westminster to play basketball.”