Students at Hillside Elementary School welcomed some spring guests this past week and were happy to take them under their wing.

Kindergartners at Hillside were able to watch as baby chicks hatched from eggs nurtured in incubators within their own classrooms. Each classroom received 12 eggs in April, and students were anxiously awaiting the chicks’ arrival throughout the approximate 21-day incubation period. In Tasnim Nagrath’s classroom, the students were present to watch the baby chicks break out of their shells live and in-person.

“When they hatched, they were very yucky,” said kindergartner Dante E.

“Some of them came out gold, and some of them have different kinds of beaks,” added Cassidy J.

Since their hatching, the students have had time to get some hands-on experience with the newborns. Interacting with the chicks each day, they have learned important skills across several subjects while watching them grow up before their very eyes.

“We’ve been observing their growth on a weekly basis,” said Nagrath. “These chicks are living in our world; our writing is about them, our science, and our math.”

Nagrath said that the lessons actually started during the incubation period, and despite the old adage, the students counted their eggs before they hatched—and did much more than that as well. 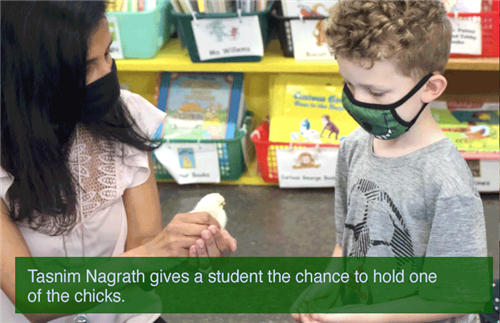 “We put a flashlight up to the eggs and talked about their hearts and blood vessels,” she said. “We’ve been learning about their anatomy, the stages of growth and how to take care of them, so there is a whole curriculum embedded.”

Learning all about the young birds, the students have also gotten to know them. Giving the chicks a special ceremony on Wednesday, the students gave their new friends names such as Pecky, Fluffy, Snuggly, Tom-Tom, and Pom-Pom.

“This is their little family now,” said Nagrath.

“The gold ones are my favorite,” said Remi B. “Because I love the color gold.”

Although the students have become accustomed to their guests, they know that they have to go back home eventually. With the eggs generously lent by a farm, the students are aware that they need to fly the coop and return to where they belong.

“At the end of this week the chicks go back to the farm and have a happy life there,” said Nagrath.

Despite having to say goodbye, the students have mementos of their guests including chick hats, drawings, and something that Nagrath said is the most important thing.

“They are really developing a love and passion for animals,” she said.