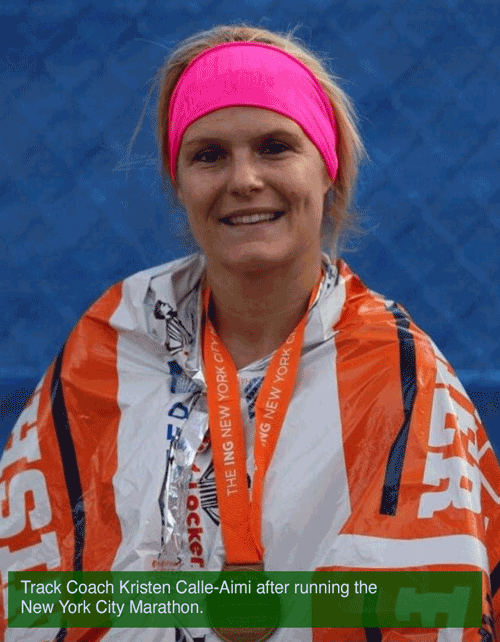 That is why she chose to run in the upcoming Boston Marathon this fall. As a coach, Calle-Aimi said she wants her team to understand that running is more than a school sport.

“Running has been a part of my lifestyle, it has changed my life and made me a stronger and more confident person,” she said. “If I am going to teach them how to run, I want them to see that I am passionate about it and I am still doing it to this day.”

Calle-Aimi, who is also a teacher at Hillside Elementary, recently announced that she was preparing for the 125th Boston Marathon, not only to inspire her team, but also to raise money for the charity, 261Fearless. Launched by Kathrine Switzer, the first woman to officially enter, run, and finish the Boston Marathon, the charity uses running as a vehicle to empower and unite women across the country. It is a charity close to Calle-Aimi’s heart, not just as a woman, but also as a coach.

“I wanted to raise the money and run to show the young women that I coach, and even men too, that they can go out and achieve anything they want and have support behind them,” she said. “I loved it because it supports women in a community to come together and run together.”

Although she has been an avid runner since high school, Calle-Aimi has not participated in a full marathon in eight years. She said preparing for a marathon requires more than physical training.

“It's a lot of mental preparation. People laugh when I say that but it is true,” she said. “If you mentally know that you can set out and complete a goal, then there are other goals in life you can achieve.”

Completing the race as quickly as possible is Calle-Aimi’s top goal. But for the first time in her running career, she said, there is another, perhaps more important, goal as well.

“I want to inspire these kids,” she said. “This is what they need to see right now.&rdquo

For some of her students, hearing about 261Fearless from Calle-Aimi was their first time learning about Kathrine Switzer’s story. Sharing the source of her motivation with her track team, Calle-Aimi hopes to inspire some future marathon runners herself.

“I was excited to share with them that I was going to train for the Boston Marathon and they became excited,” she said. “It gives me goosebumps and gets my heart pumping.”

You can donate to Kristen Calle-Aimi’s fundraiser page here: givengain.com/ap/kristen-calle-raising-funds-for-261-fearless/