Fifth Annual Multicultural Book Fair Brings Something for Everyone

The annual Hastings-on-Hudson Multicultural Book Fair has broadened the types of stories available to students again this year.

The fair had more than 1,000 books on sale this past week in an effort to ensure that a wide array of cultures are reflected in the literature available to students and families of the district. The book fair is in its fifth year of helping the voices of multiple cultures be heard in the Hastings-on-Hudson community, something that had students of all schools excited to see.

“I think it's great,” said Hillside Elementary School student Mary O. “I think it's good for everyone to learn about all different kinds of cultures.”

“It’s really cool to showcase the works of authors of color in an environment where people can come in and learn, and there's all these different books,” added Hastings High School student Ciara McConnell. 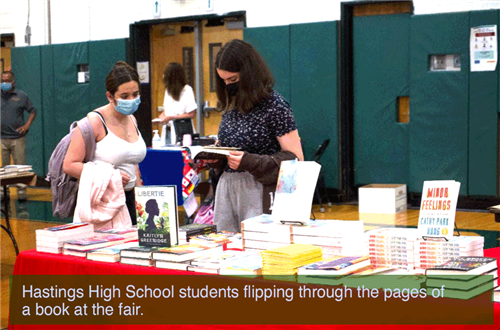 Hosted by the Race Matters Committee, an organization dedicated to sparking critical conversations about race and racism in the school district, the event has been a unique avenue for the committee to help curb racism, a task that has been always been a top priority.

“We certainly have come a long way, and we still have a long way to go,” said Dr. Jenice Mateo-Toledo Director of Diversity for the district. “Racism is insidious, and it changes, so we constantly have to find ways to see it first and then find ways to uproot it.”

The organization, formed by teachers in 2016, has developed a multitude of tools and skill sets aimed at improving racial literacy among students and teachers in and out of the classrooms, something that was somewhat uncharted territory five years ago. 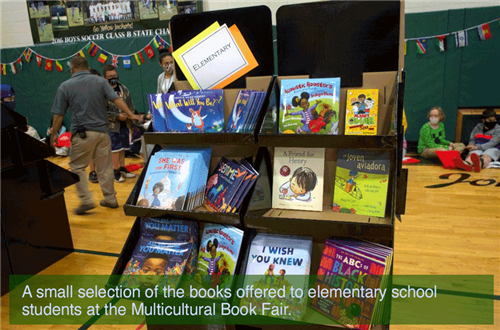 “As a district, we have leaned into this discussion, this uncomfortable conversation that most districts weren't willing to have at the time,” said Mateo-Toledo. “So I am really proud of our district for taking the chance on their teachers and for really supporting us, our community, and the committee.”

“It grew out of a feeling that the conversations students are having about race could be deeper and more complicated than the conversations that we're having,” added Race Matters Committee Co-Founder and teacher Ross Abrams. “We wanted them to be able to engage in discussions that are really thoughtful about race that fit within the goal of teaching a student who can think broadly about issues and cannot assume that their experience is the only experience of the world.”

Formed off the concept by educator Rudine Sims Bishop that books are sliding glass doors and windows for children, the committee created the book fair to offer students diverse windows into other people’s cultures. It seemed to be a perfect way to help represent the perspectives of people of color and other cultures, but the endeavor turned out to have its own set of challenges.

“When we first started this book fair there was a belief that the books wouldn't sell and it was difficult to find authors of color at the time,” said Mateo-Toledo. “Then in our first year to see these majority white children walking in and grabbing books with black and brown children on the cover, it just goes to show that we've proved the naysayers wrong, that our children are open and we just have to provide those opportunities for them.”

Watching the fair expand after half a decade, members of the Race Matters Committee said they want all students to realize that the book fair has something for everybody and that the perspectives presented in these books could teach them something new.

“I think the biggest takeaway is for our students to recognize that perhaps their assumptions about any one particular racial group are wrong,” said Abrams. “I hope when they get there, those assumptions start to explode and they start to see what a wonderful diversity of ideas and voices and perspectives are on the table in front of them.”

While the book fair is providing students the opportunity to increase their exposure to different cultures now, the organizers maintain that it is also putting in the groundwork for their future; something they said was the most important goal.