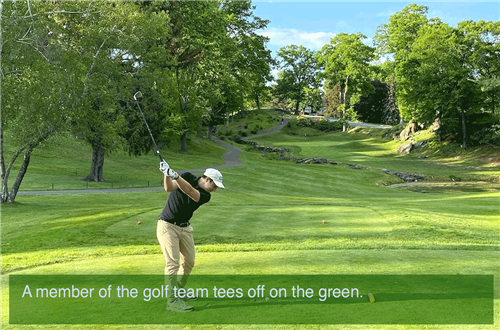 The Hastings High School varsity golf team has made the rounds this season. Coming close to becoming co-league champions after their loss to Ardsley on Thursday, members of the team said they were just grateful to be able to be on the course at all.

“This year, to have any season at all, has been a big relief,” said sophomore Michael McQueen.

For Berger, who has helmed the varsity golf team for the past six years and is himself a Hastings alum and former golf-team member, seeing the team tee off so well hit home.

“It’s just amazing to come back and be able to coach the team,” he said. “It’s a big team and everyone just has a lot of fun.”

For many of the members, playing golf for a team is a new concept, and others have picked up their putters only over the past year.

“I got really into golf over COVID and progressively got more and more into it,” said freshman Justin Baldassare. “I got the golf bug now and I’m looking forward to playing over the summer and coming back better.” 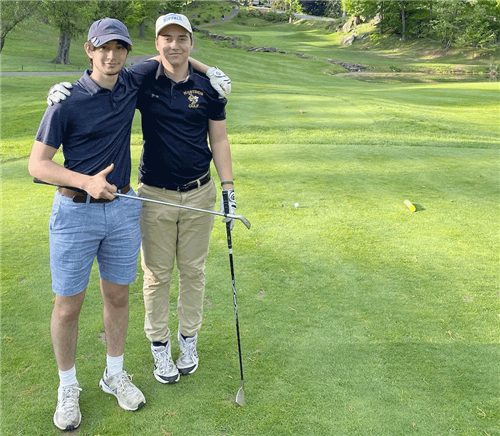 Baldassare, who initially wanted to play basketball but switched sports to stay on the safe side this season, was no stranger to golf having hit the range with his parents when he was younger. The recreational background of the sport is something that many other team members can identify with.

“I’ve been playing golf since I was five or six, going to the range with my dad,” said freshman Oscar Hayes. “I’ve never played it in a competitive environment so I thought it would be a fun challenge and fun to play.”

Hayes and Baldassare both helped Hastings to victory over Tuckahoe High School on May 12 having shot their best game ever along with the rest of the team. While they have proved to be promising golfers, they are able to help some of their teammates who are entirely new to the sport.

“It’s a lot more challenging than I expected it to be,” said sophomore Kevin Condon. “The sport takes so much technique and precision.”

Golf is especially strange to Condon, who is normally on the ice for Hastings High School, playing hockey. He is one of the freshest faces on the golf team this season, which has 18 players, a sharp increase from only five players two years ago.

“It’s been fun meeting new people and playing on the courses,” said Baldassare.

Seeing the second largest turnout for the team in two years, Berger said that the rise in interest is due in part to the team members and their attitude toward the game of golf.

“It’s all about the culture,” he said. “These kids come in and work year-round; it’s their commitment, dedication, and hard work. They’re golfers.”

The team is set to compete against Woodlands High School on Monday at Metropolis Country Club.