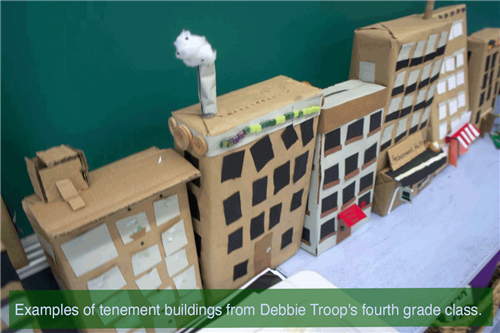 Some students at Hillside Elementary School were able to take a trip to the big apple this week—and 100 years into the past.

In Hillside Elementary School’s fourth grade class, students have been studying the Lower East Side and its role in immigration during the early 20th century. While learning of the poor living conditions for many immigrants during the era, the students constructed model tenements to get a real feel for their density.

“I really enjoyed learning about immigration and making something that I would never experience in my own lifetime,” said fourth grader Pilar B.

In fourth grade teacher Debbie Troop’s classroom, students used their creativity to build the dwellings out of cardboard boxes, adding architectural details and decorations to their buildings to make sure they represented the different cultures of the neighborhood and really see how difficult life was back then.

“I never understood how difficult and horrible it was to live in a tenement,” said fourth grader Nora H. “I am grateful that I live now.”

“They read about and understood what it was really like to live in these tenements,” said Troop. “Five floors that were cramped and crowded with no electricity or anything.” 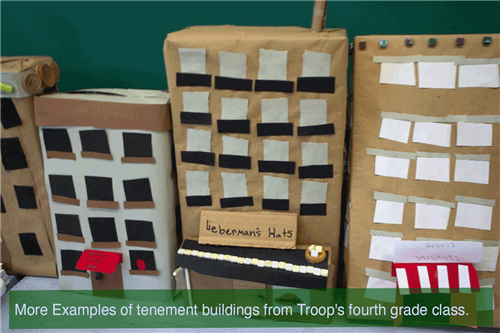 Students also studied the cultural aspects of the Manhattan neighborhood by covering all of the different ethnicities that populated the area. After finding out about specific neighborhoods such as Little Italy and Little Germany, students created a papier-mâché model of the head of an immigrant who might live in one of these neighborhoods. In adding artwork to their learning, students found out how their immigrants would look as well as how they would live, work, and play.

“We were aiming to give them a real immigrant experience,” said Troop. “What it would be like to be a kid during this time period.”

While Troop hoped students would get an authentic understanding of life for the immigrants, she also praised their artwork and imagination.

“The creativity of these students is really unbelievable,” said Troop.

Next, the students are slated to write an account of daily life from the perspective of their immigrant.