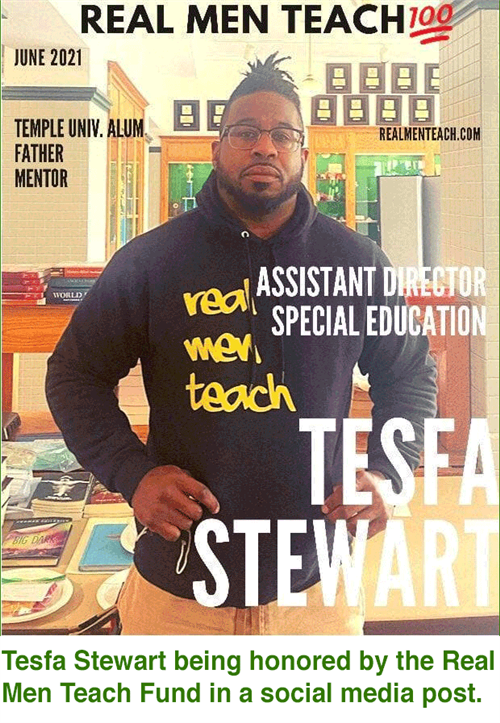 For the past five years, Assistant Director of Special Education Tesfa Stewart has advocated for students of color and those with special needs in the Hastings-on-Hudson School District. Last week, Stewart was honored by Real Men Teach, a campaign that raises funds to help keep male educators in the classroom by recruiting, retaining, reimagining, and reinvesting in male educators of color.

“If you look systemically at education, it's a predominantly white female profession,”

“If you look at education statistically in America, close to 80% are white and female,” he said. “Male educators, and black male educators, who comprise about 2%, are few and far between. I think it's important for children and adults to see male teachers, and male educators of color, in the classroom.”

For Stewart, advocating for marginalized people is personal.

On teaching and educating in the Hastings-on-Hudson School District, Stewart said his experience has been positive. As co-host to the school district’s equity event “Time to Talk about Racism” and Hastings High School Affinity Group advisor, he has brought forth ideas and changes to help diversify the school district. He said he hopes those who may be hesitant about diversifying the teaching staff will realize the benefits.

“I'm a firm believer that there's energy in the universe and it's always going to correct itself one way or another, he said. “You just have to stay your course and hope that people will come around. People move at their own speed, and the rising tide lifts all boats, as the saying goes. So hopefully, you know you're doing the right thing and you advocate and support those who can't support or advocate for themselves.”

Although Stewart spends much of his time supporting others in his work, he commended the community and his colleagues for the support they have given him.

“There have been a lot of people who have been very positive and super supportive. I don't think I would have been able to navigate half of the things I have without that support,” he said. “There are also many colleagues, families in special education, and community