Hastings High School theater students are presenting their rendition of Shakespeare’s work this weekend. But they aren’t doing just one of his plays—they are doing all of them!

The Hastings High School theater department premiered “The Complete Works of William Shakespeare Abridged” this Saturday in the Farragut Middle School Courtyard. It is the first high school show of the year.

“It’s a nice way to start off the year with something simple and fast paced,” said actress Anijah Clegg.

“It’s a good contrast to the rest of the year,” added actor Erik Ghalib. “You’re not coming to this show for a deep message, you’re coming to laugh.” 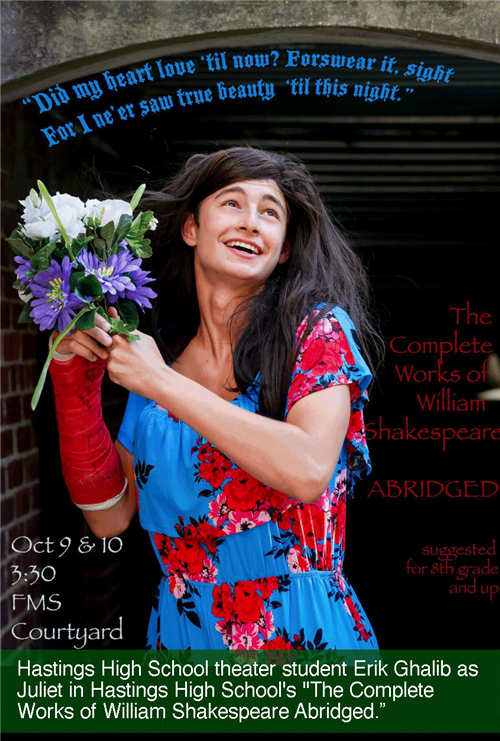 Penned by writers Adam Long, Daniel Singer and Jess Winfield, the show takes a comical twist on Shakespeare's works with a multitude of characters performed by a small group of people in short scenes. Theater Director Rachel Wineberg thought the format was perfectly suited to begin the year.

“I felt like we needed a show where everyone could just have a good time,” said Wineberg. “And it’s just great to see everyone live, outside and without masks.”

Beginning the year on a lighthearted note, students said, was less stressful and more fun for cast and crew, something they hope comes through to the audience in the production.

“This show sets off a standard, like a good omen, for the rest of the year,” said stage director Maya Tadmor. “We just want to make sure everyone gets a laugh out of it.”

For some students, the show marks their first live performance in years.

“My last performance was freshman year,” said senior Clegg. “So, this year I am excited to just be in more plays.”

“I’m really excited to finally be back and doing something like this,” added Markley. 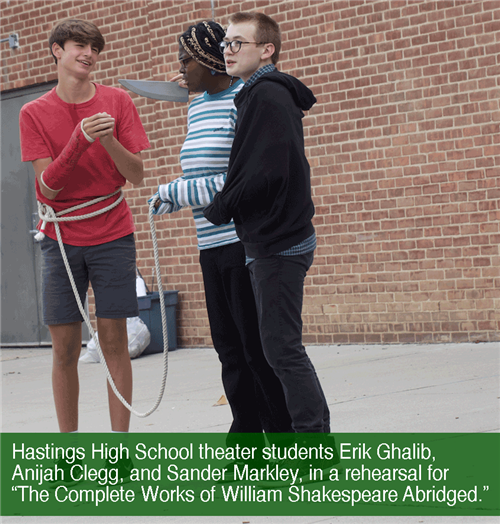 Student players said they were looking forward to this weekend’s performance as well as the upcoming shows scheduled throughout the year.

“I am looking forward to working with more people who take it more seriously and where everyone contributes to something,” said Tadmor, who serves as director.

Some students are thinking of adding even more shows to this year’s list of performances.

“We’re looking to add another show on top of the previously planned productions,” added Ghalib. “So, there’s a lot of theatre coming this year.”