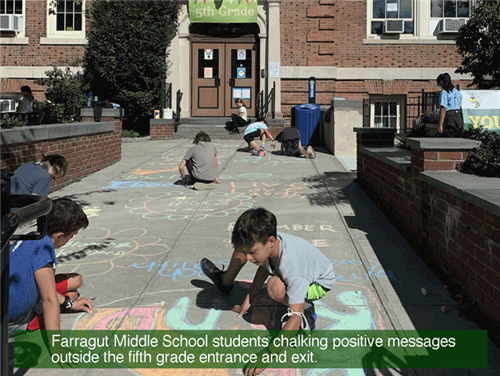 Farragut Middle School’s fifth graders put down their pencils and picked up chalk on Thursday to decorate the sidewalk in front of the school’s main entrance with positive messages and drawings for all students to see.

“I drew a rainbow and helped somebody with something else,” said fifth grader Cali Pagnan. “I did it because I want people to feel positive.”

The positive art project was an activity for fifth graders to learn about National Bullying Prevention Month, which is designed to prevent childhood bullying and promote kindness, acceptance and inclusion in schools, homes, and communities. The chalking idea came from Farragut Middle School Guidance Counselor Jenna Ryan who decided to focus on the positives.

“Rather than highlight the negative behaviors associated with bullying, I thought i would be a great idea to have the students look at positive behaviors,” said Ryan “We wanted to focus on kindness and let them know that they have someone if they need them.”

While Ryan made sure students knew the meaning behind National Bullying Prevention Month, she also wanted to ensure students had fun while drawing and writing kind messages for their classmates. 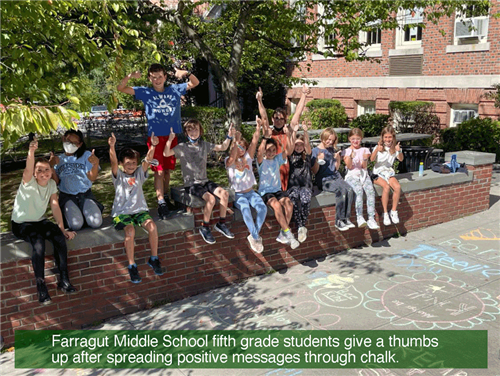 “I really liked doing it,” said fifth grader Sadie Ratcliffe. “I feel like I did it to help other students and make them happy and positive for the month of October.”

The creativity of the students during their sketching process came as a surprise to Ryan.

“They were incredibly positive messages,” said Ryan. “I brought a book out with examples, and they didn’t need it at all, they went straight from their imaginations.”