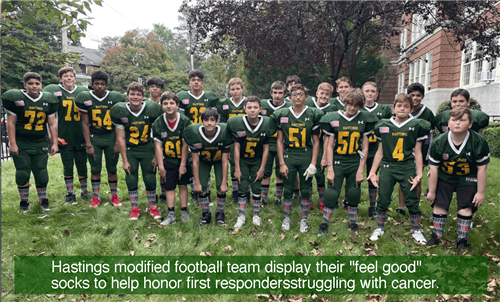 “Hastings-on-Hudson athletics programs have been giving back to the community with a variety of events for a while now,” said Wendol. "I decided to make it more large-scale this year and design an event that involves all of them.”

“It's awesome to feel like we are helping, and that Hastings is taking action on things that matter,” said Sophie Mulaire, a senior and girls varsity volleyball player.

For the past five years, the Hastings High School girls varsity volleyball team has held its own “Dig for a Cure” fundraiser where players and coaches promote awareness and raise funds for breast cancer. For the event, the team dresses in pink jerseys while selling baked goods, clothing, and merchandise with all proceeds going toward the Breast Cancer Research Foundation. This year, team members were happy to discover they were not alone in their efforts.

“It’s nice to know that everyone is on the same page,” said Mae Rooney, a senior and girls varsity volleyball player. 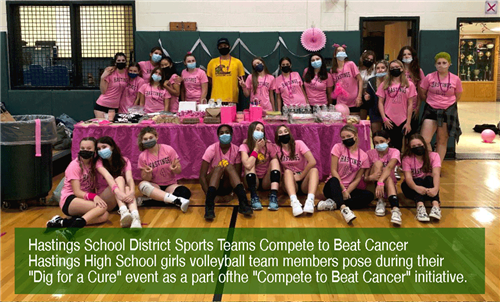 “It's great that more people are on board this year and that different teams have chosen different causes,” said Emily Kehoe, girls varsity volleyball coach. “I think it's nice that we can incorporate other charities as well as breast cancer.”

It is Kehoe’s fifth year spearheading the “Dig for a Cure” fundraiser. Kehoe chose the disease not only to honor National Breast Cancer Awareness Month, but also because of its relevance to her and her players.

“It was a cause that was near and dear to all of us and to many of the girls' families,” she said.

Kehoe was not the only one to choose a cause that was special to her. Modified football coach Ezra Elliott took the “Compete to Beat Cancer” initiative as an opportunity to fundraise for the first responders of 9/11 who are currently battling cancer and health issues.

“I recently lost a friend who was a first responder, and it was definitely linked to 9/11,” said Elliott. “I felt like fundraising should be meaningful and this was something that was personal.”

“We’re honoring the people who sacrificed their lives on 9/11 and those who have cancer from that today,” added eighth grader Jakob Kessman.

As part of their fundraising effort, modified football team members wore “feel good” socks adorned with images of first responders to honor and raise awareness for those who made sacrifices on 9/11. The team’s purchases will go to the FeelGood Foundation, a non-profit that assists emergency personnel who have been injured or face serious injuries. While fundraising is beneficial, Elliott said his main goal was to get the word out.

“Money is great, but from an educational awareness standpoint, I thought it fit well,” he said.

Raising awareness was something the players on Elliot’s team were more than happy to do.

“I feel good that we are all wearing them,” said eighth grader Colin Sexton. “Hopefully, it inspires people to go out of their way to help people.”

“It’s great to have our whole team representing this and try to spread awareness,” added eighth grader David Jackson.

Wendol praised the teams and coaches for their back by the resourcefulness.

“I am extremely proud and honored that the entire athletic department has embraced this initiative,” he said. “The coaches and players took the reins in designing their own fundraisers and I couldn't be more impressed by them all.”

Like Elliott and Kehoe, Wendol has a personal connection to cancer as well, which led to the idea for the initiative in the first place.

“Many people have been affected by this horrible disease,” he said. “This event especially speaks to me because I recently lost my mother, two of my friends, and a couple of family members to cancer, as well as having a few friends fighting it right now.”

Although the “Compete to Beat Cancer” event was created to help those battling the disease, coaches have said there is also a beneficial effect on those who are fundraising for the causes themselves.

“I think a lot of people see high school athletics as a pathway to college,” said Kehoe.

“To me, high school sports is about building character, teamwork, and being a part of something that is bigger than you. To work together for a bigger cause is another lesson that the athletes will take with them beyond Hastings.”

As the teams continue their fundraising efforts throughout the fall, Wendol said he has plans for future school-wide fundraisers that will incorporate other charitable causes.