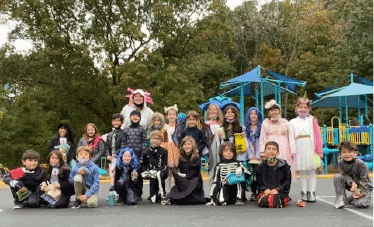 Second graders in Lisa Levine’s class combined learning with Halloween fun. Students were able to paint pictures of pumpkins, make their own scary spiders, and monsters.

"I had so much fun, I love painting and doing art!" said second-grader Brooke D.

"I loved painting the pumpkins because I haven't painted in a while,” added second-grader Cooper C. “I had never painted something so cool!"

Levine said the holiday gave her a chance to introduce some Halloween elements into the classroom, making academics fun.

“I wanted to have some good old-fashioned fun,” she said. “So, we infused math and art together.”

While painting pumpkins on canvas generously donated by Levine herself, students learned about spatial awareness. Students also used math while making spiders and monsters by putting a place value on each of their legs after crafting their creepy creations.

"I loved the place value spiders. It was math mixed with Halloween,” said second-grader Noa D. “I like stuff like that because sometimes you forget you are doing schoolwork and it’s so fun."

After the Halloween festivities in the classroom, the students gathered for a group photo dressed in their costumes.

"I had so much fun hanging out with my friends and my teacher on Halloween,” said second-grader Gregorio B. “We got to make so many fun things!"