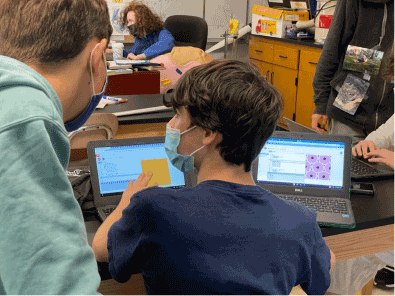 A new club at Hastings High School is helping students catch on to coding!

The Hastings High School Programming Club only started this year, but it's already attracting students eager to learn how to code and program their own animations, simulations, and even video games.

Club President Jacob Goldman-Wetzler had the idea for the club during the pandemic when he picked up programming during his free time at home. Now, the Hastings High School sophomore wants to share the knowledge he gained with his classmates.

“I really like programming and have been doing it in different languages for a few years,” he said. “I wanted to have a community where all of us could help one other program rather than work alone.”

The club is focusing on JavaScript, a text-based programming language that allows users to make web pages interactive. Freshman Miles Cupal joined the club to create things like his own animated illusion.

“I don't know a lot about coding, but I like learning JavaScript,” said. “It has a lot of applications in the real world.”

As Cupal worked on his mind-bending illusion, fellow club member and freshman John Mielke worked on a web-based video game. The homemade video game, inspired by the 1980s arcade hit Galaga, was something he had accomplished almost entirely in his time with the club.

“I mostly learned from the club,” he said. “I’m not really sure what I am working toward, but I am pretty sure this is close to what I want.”

While membership was originally a group of friends, the club hosts about a dozen students each meeting, surprising even the club advisor.

“Not only are there a lot of them, but they are mostly on the younger side, which is promising for future membership,” said club advisor Marc Rosner.

While the club is currently focused on learning the essentials of JavaScript, its creators are looking forward to tackling more complex projects as a team.

“Once there’s a critical mass of people who know how to program, we can start doing group projects together and that will be really cool,” said Goldman-Wetzler.

Goldman-Wetzler said the club is open to anyone—so long as their hearts are in the code.

“We don’t want an environment where they don’t actually want to learn how to program,” he said. “But if they want to learn, they should come to a meeting.”