“It wasn’t the best race I ran all year, but it was definitely the best race I could have run that day,” she said. “It was awesome to be there with some of the top cross country runners in the state and I really hope I can do it again next year.”

Thomas said she found her love of running after doing a local fun run with her dad when she was younger. Since then, she has been improving her skills and letting her talents shine on the Hastings High School teams. 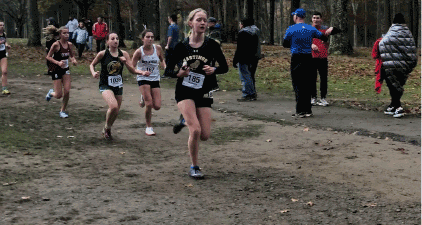 “Since freshman year of high school, I have been more serious and have been on the cross country and track teams,” she said.

When Thomas isn’t on the track or field or studying for her classes, she lends her talents to the next generation of Hastings athletes.

“I do a program called running buddies where I run with a sixth grader,” she said. “We meet up on the weekends and run a mile.”

Although Thomas was the only Hastings High School runner at the event, she commended her coach and team for her success.

“The environment here is great,” she said. “I have an awesome coach and could not have gotten to where I am without her, and I have made some of my closest friends on the cross country team. They are always encouraging and helpful.”

Although she plans to continue running, Thomas hopes to balance it with her studies in college.

“I would like to maybe go to a Division III school,” she said. “I’d really like to focus on my school somewhat equally to my running.”