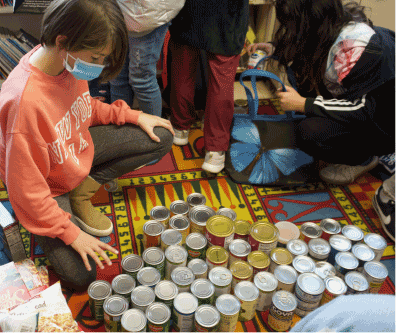 Normally, Thanksgiving food drives involve collecting food items for a charity, but the Farragut Middle School SAC assembled entire dinners and donated them to their community. 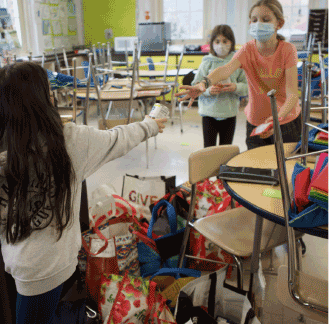 As part of their “Giving Thanksgiving” food drive, the Farragut Middle School SAC collected non-perishable food items, disposable tableware, and recyclable bags this month. Members of the club stayed after school on Monday to sort through donations and combine items into individual bags to give families a full Thanksgiving dinner.

“We’re trying to put all the items into one bag, so it’s a Thanksgiving dinner in a bag, and give it to people in need,” said sixth grader Trinity Weise. “We want to help out with people who can’t get stuff for Thanksgiving or have a big dinner.”

As club members combed through the piles of cans and boxes on club advisor Shari Kavanagh’s classroom floor, she shared her admiration for the club’s initiative: the students planned the food drive and its purpose themselves.

“We try to raise school morale, but we also try to help out with the community and the club came up with how and what they wanted to collect, and they named the drive,” she said. “Their idea for this was to give back to our own community, specifically people who might not be able to celebrate their own Thanksgiving,” she said.

As club members assembled the Thanksgiving dinners in a bag, they didn’t forget to include table decorations for families to make their holiday dinner a little more festive.

“I want whoever gets these to enjoy an actual Thanksgiving this year,” said Weise. “Maybe they haven’t been able to in other years, but now they can and it's fun to celebrate Thanksgiving and it’s fun to help with that.” 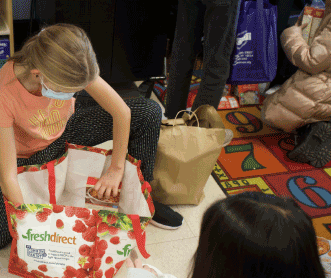 The “Giving Thanksgiving” bags were donated to the Hastings Food Pantry, operated by the Hastings Youth Advocate Program, which distributed them to families in the area. Kavanagh said that in addition to helping local families, the experience was a valuable lesson for club members.

“I think that it’s important for them to learn not to take things for granted,” said Kavanagh. “And especially this time of year to be grateful for what we have.”