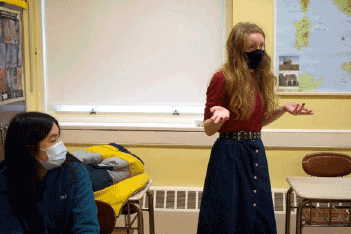 As people of the Jewish faith celebrate Hanukkah this week, one club at Hastings High School is learning about the Festival of Lights traditionally.

The Hastings High School Yiddish Club was formed this year by a small group of students who wanted to learn the language while also learning more about Judaism and Jewish culture. Yiddish, a German-based language highly influenced by Hebrew, is historically spoken by Ashkenazi Jews but has influenced and spread to many countries and cultures around the world.

Started by junior Amelia Verba-Beaudouin, the club focuses on the basics of the language such as the alphabet and important words and phrases. Although she was interested in learning the language, Verba-Beaudouin was first drawn to Yiddish because of its music.

“Over the pandemic I started listening to a lot of Klezmer music,” she said. “It can be fun and energetic, so I wanted to understand what they were saying.”

After gaining some knowledge of Yiddish, Verba-Beaudouin decided to form the club with friends in order to hold conversations in it. However, many members of the club do not have a connection to heritage like Verba-Beaudouin does. 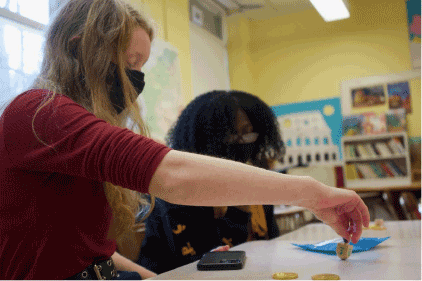 “Half the club isn’t Jewish,” said Verba-Beaudouin. “But I fill them in on whatever they need to know.”

“It seemed like it was interesting,” added senior Anijah Clegg. “So I decided that I wanted to learn.”

And what better time to start learning than during the Festival of Lights.

“I’m not really educated on Hanukkah at all,” said Clegg. “I am looking forward to learning.”

Verba-Beaudouin taught the club about the history of Hanukkah before handing out dreidels, a spinning toy associated with the holiday. After learning the rules, club members played the game for chocolate gelt and got a taste of the holiday.

Looking forward to the future, Verba-Beaudouin plans to hold similar experiences for club members to learn about Passover and Purim. She is also considering organizing club field trips.

“If we were able to go into the city and go to the Jewish History Museum or find a fluent Yiddish speaker to talk to us that would be really nice,” she said.

For Verba-Beaudouin, the club is not just a way to teach her culture and the language to classmates but also a way to continue learning more of it herself. 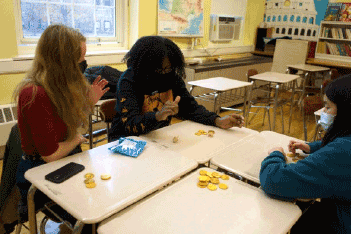 “I think it's just a nice way to connect to my heritage,” she said. “I was studying on my own last year but I kind of dropped it a bit. So, I wanted to make sure I could keep it up and actually learn the language.”

“Also, now I can listen to Klezmer and understand what they're saying,” she added.