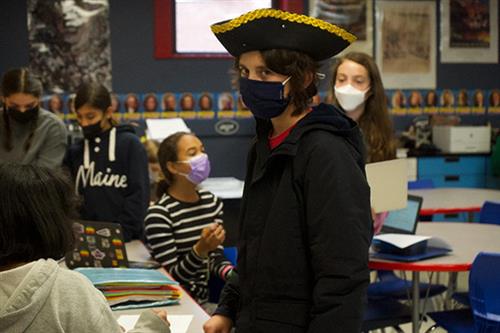 Farragut Middle School’s seventh graders participated in a heated debate this week. At issue was whether to sign the Declaration of Independence.

Before debating the 245-year-old issue, seventh graders studied the events that led to the Revolutionary War, ultimately deciding whether to take the patriot, loyalist or neutral position.

“We learned a lot about the little things that set the colonists off,” said seventh grader Rosie Dunn. “We looked at both sides and how the loyalists saw things differently than the colonists.”

First, using only technology available during the time, students participated in a town hall meeting, taking on one of the viewpoints of patriot, loyalist, or neutralist. Making sure to have three solid reasons, counterarguments, and rebuttals for their stance, students on the loyalist and patriot sides were instructed to sway the neutralists in their favor.

“In the beginning, we weren’t attacking the British as much,” said Dunn “We were being nice but at the end, we were kind of yelling at them.”

“In the end, we told them that it was absurd for them to side with the British,” added seventh grader Orly Fishman.

Students then had the chance to rewrite history by introducing today’s technology into the debate.

“Town hall meetings were often the only means people had to express their viewpoints and share information,” said seventh grade teacher Joan Paradis. “After conducting a town hall, we allowed students to use modern technology and asked them to imagine how this would look and how they would share information” for maximum effect.

All students learned the historic outcome of the original debates. Interestingly, however, in the middle school’s modern re-enactment only one of three classes sided with the patriots.