Hillside Elementary School’s third graders are creating their own arcade games. But these games do not require batteries or electricity; they just require a bit of creativity.

Students spent time learning about forces, motion, and gravity in their classes these past few weeks. As a culminating project, the students worked in groups to create a variety of arcade-style games out of cardboard and other upcycled materials found at school.

The activity was inspired by the short documentary film, “Caine’s Arcade,” about a boy who used cardboard boxes and everyday objects to create arcade games. Students were able to watch the film for inspiration for their creations. Now, as students put the finishing touches on their arcade games, they are happy to see them come to life. 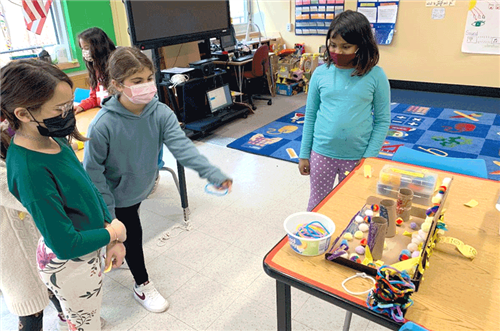 “We made a ring toss,” said third grader Ira N. “It was a lot of fun making it and we learned about forces.”

Arcade game construction is taking place in Robin Farrell’s science, technology, engineering, arts, and mathematics class. Farrell said the activity fulfills the engineering and technology standard for the class as students use their knowledge of force and gravity to create working games that challenge their classmates. 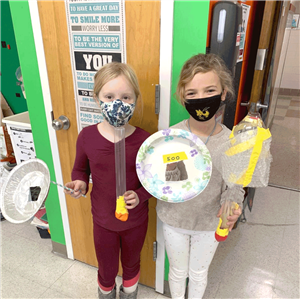 “We only use found materials and give them a new life as carnival games,” she said. “Students also need to identify where in their games certain scientific concepts take place.”

Students had to abide by limits on time and materials when creating their games.

“The game was really hard and a lot of fun,” said third grader Gideon W.

For Gideon’s arcade game, his group got their inspiration from skee-ball. Using a spoon, the player must launch a ping-pong ball to get it into a hole in cardboard for a specific score.

“If you pull the spoon back farther it gives it a lot more thrust than a hand would, just like we had learned,” he said. “I love STEAM, it is actually one of my favorite classes.” 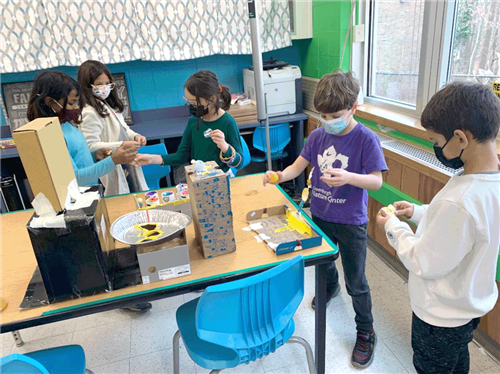