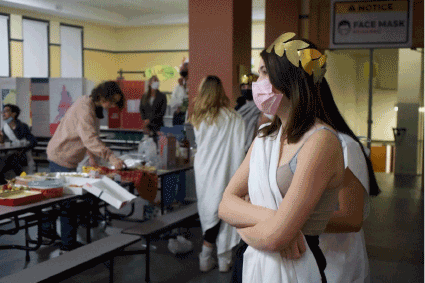 Hastings High School’s Latin students celebrated Saturnalia this past week, an ancient Roman festival honoring the deity Saturn. In ancient Rome, the holiday was typically held in December and celebrated as a carnival with public banquets, games, and gift giving.

More than 80 students in Veronika Aleiner’s Latin class attended the celebration dressed in togas and gold laurel wreath crowns. There, they had a chance to socialize with fellow Latin speakers over food and drinks.

“It’s nice to have this event back,” said senior Bo Hopwood. “This is a really fun part of Latin class and I’m really into history so Latin was a great choice as a class.” 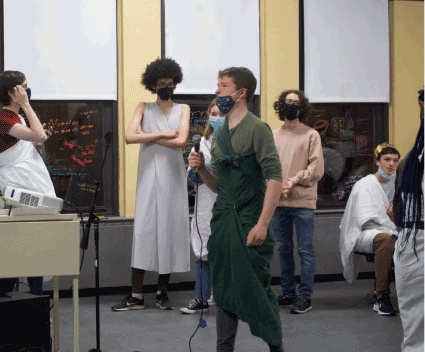 The event, which was a decade-old tradition at Hastings High School, returned for the first time in two years on Thursday night. The celebration also gave students an opportunity to flaunt their Latin and ancient Roman knowledge by playing a Jeopardy-style game and constructing ancient Roman aqueducts out of marshmallows.

“This is an event that's all about language, culture, and mythology,” said Aleiner. “It’s really an occasion and opportunity for the students to make Latin come to life.”

In one game, students matched photos of ancient Roman-influenced structures across the world with the countries where they were built. Students also created video skits in Latin.

“This is something that makes Latin a very living language for the students,” Aleiner said. “You really need to recreate this piece of the culture to be able to understand it.”