The Hastings Theatre Program: Take a Behind-the-Scenes Look at The Outsiders 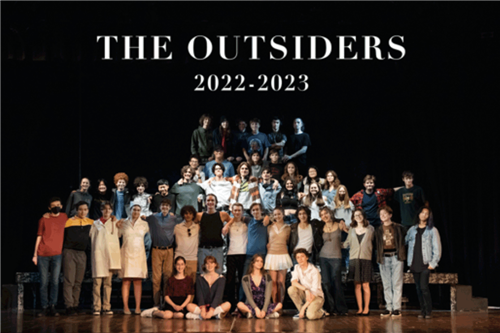 On Friday, October 21, and Saturday, October 22, high schoolers in The Hastings Theatre Program put on their first production of the school year, The Outsiders.

The Outsiders is about two weeks in the life of a 14-year-old boy. It tells the story of Ponyboy Curtis and his struggles with right and wrong in a society in which he believes he is an outsider.

There are various fight scenes in the play as well as a church fire where the main characters rescue children from a burning building.

"Our Director, Laurie Walton, brought in specialists to teach the students how to stage fight and a lighting expert to create the look of a fire off-stage," said Production Coordinator Phyllis Udice. "Laurie knew for the show to be successful, she had to get these two factors working just right. It’s her attention to detail that helped to create a dynamic production, as well as incredible learning opportunities for both the cast and the crew."

According to Walton, the students grew both professionally and personally through the production process.

"It was awesome to see them joyously experience performing such profound, difficult material with dedication and commitment all while maintaining their academics and budgeting their time with their many other interests and activities," she said. "Hopefully, the positive response from the audience confirmed for them that their hard work was well worth it. It certainly confirmed it all for me.”

[Click here] or on the image to the right to take a behind-the-scenes look at the cast and crew during dress rehearsals.