Second Graders Learn the History of their Village & Home

Through a series of preserved photos from the Society's local history archives, Barry used a "show and tell" method to teach students about principle industrial sites on Hastings' waterfront, beginning in 1828 with the marble quarry located in what is now Quarry Park.

Barry explained that in 1835, a miniature railway was built to transport stone from the quarry to the waterfront, so it could be cut up and shipped downriver.

"Then came the railroad in the 1840s which changed the Village of Hastings-on-Hudson and its waterfront forever," Barry explained.

The Hudson River Steam Sugar Refinery was established on the waterfront, employing about 200 workers. A fire burned the factory down to rubble, which led to the formation of the community’s first fire company in 1876 and, indirectly, to the incorporation of the village in 1879.

"How did the fire start?" asked one student.

"The cause of the fire was never confirmed," answered Barry.

With the rise of industry, the village began to draw wealthy Manhattan residents. Large estates were built on the sites of former tenant farms.

Even two cast members of The Wizard of Oz – Frank Morgan (the Wizard) and Billie Burke (Glinda the Good Witch), were residents of Hastings.

During a Did You Know? section of her presentation, Barry asked students, "Do you know Burke Estate Field across from the middle and high school?" 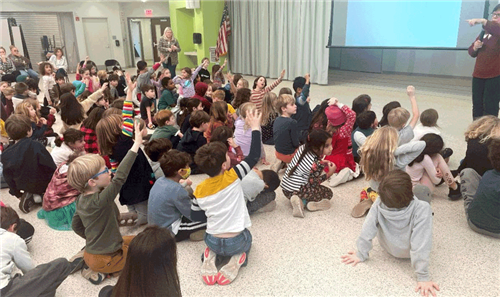 "What about the Wizard of Oz?" Barry asked, pulling up a photo of the cast.

"Well, Hastings has a connection to the Wizard of Oz," Barry said. "Burke Estate Field was where Glinda the Good Witch lived. Her real name was Billie Burke and that's where it gets its name."

Sounds of oohs and aahs filled the room.

The remainder of the lesson included information about the Baby Boom in the 1960s, which caused the Village to build a bigger elementary school, and other interesting facts.

The Hastings Historical Society continues to devote its time to preserving Hastings' history, and, since its inception in 1971, has won the Lower Hudson Conference of Historic Services Award for Excellence and other subsequent awards for the Hastings Historian newsletter, the creation of its local history archives, and its Museum in the Streets® historical walking tour.

Students had a front row seat to history and were excited to bring what they learned about where they live home to their families.