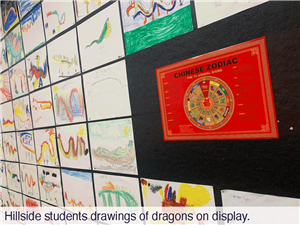 Hillside Elementary School kindergarteners helped welcome the Year of the Ox at the school this past week.

The class learned about the Lunar New Year, also called the Spring Festival in China and Hong Kong, and explored the celebration of the holiday as well as its cultural importance.

In art class, the students learned of the prominent colors and animals that are associated with the ancient traditions of the festival. Hillside’s art teacher Nate Morgan said that he makes sure to celebrate the holiday each year.

“It’s one of the biggest holidays in Chinese culture and China is a huge part of the world we live in,” he said.

While learning about the themes and myths of the holiday, students created their own red lanterns, which honor the Lantern Festival, marking the final day of the traditional Chinese New Year celebrations. They also drew their own renditions of dragons, which are commonly seen dancing throughout the streets during festivities held around the world. 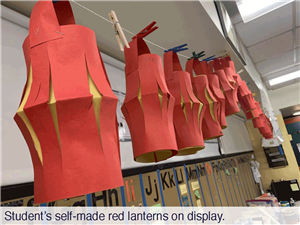 “It’s really a fun project and the cutting and folding is still stimulating for kids at this age so it is challenging and fun for them to learn,” Morgan said. “Drawing a dragon was also a lot of fun for them.”

The students watched a brief animated video about the Chinese New Year during their lesson, highlighting customs and traditions of the holiday. The video highlighted the holiday’s message of starting fresh, spending time with loved ones and sharing hope of good things to come.

“They are continuously asking to re-watch the video,” Morgan said.

You can view the video about the Chinese New Year here: www.youtube.com/watch?v=GVPHdFX9iHY.