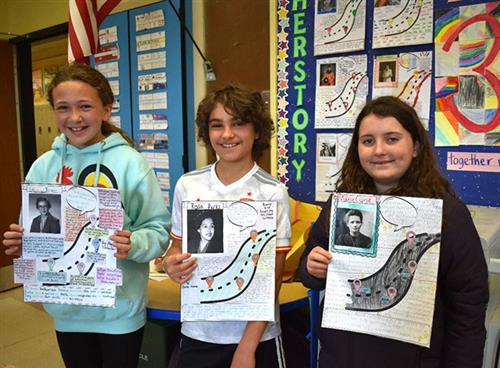 Taking advantage of Women’s History Month last month, FMS fifth graders embarked on a research project to tell a story about a notable woman. “HERstory” could be about someone personal to them, or students could identify and study someone who had left a mark on history.

Aside from several notable moms and grandmothers, the students revealed a wide range of interests in women in history. They created illustrated posters that showed the road that the women took in their lives and made a short presentation about their subject to their classes.

With many students interested in the performing arts as well as sports, the selections included a fair share of subjects in those areas. Others sought out history makers in literature and the sciences.

Dana Hastings, an aspiring scientist, delved into the achievements of Marie Curie. “I hope to be a famous scientist in the future,” she said explaining why she chose the 1911 Nobel Prize winner. “I searched for women in science and came across her and found a lot of cool facts about her,” she said. 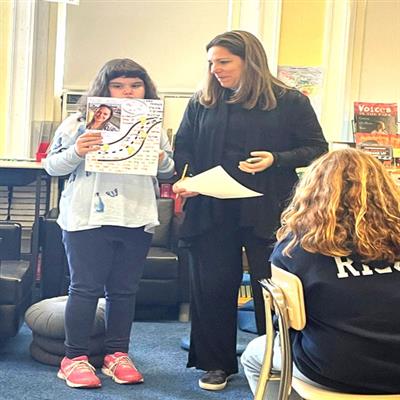 Drew Franco selected Rosa Parks as his subject. “I like her courage and how she was willing to fight for what she thought was right,” he said. Drew added that he enjoyed working on the project, “I like to do research and find out new things.“

Alyssa Schlacter chose NASA physicist and mathematician Katherine Johnson, having seen the movie Hidden Figures that celebrates her achievements. “It was really fun,” Alyssa said of the project. “I like learning new stuff.”

Drew and Dana admitted to being a bit nervous for the class presentation but all agreed with Alyssa’s observation that “It’s good for us to practice speaking in front of people.”

Kyle Case, who co-teaches her fifth grade class with Donna Gamble, was impressed with the projects her students produced. “They worked really hard and were proud of their projects,” she said. “It was a good lesson in developing research skills and the importance of finding reliable sources.”