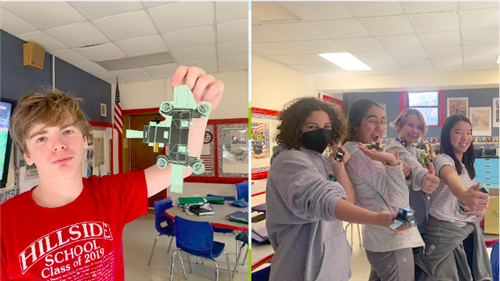 To kick off a Social Studies unit on Industrialism, eighth graders are competing for extra credit by participating in a simulation created by Social Studies Teacher Dom Cecere.

In the simulation, the year is 1909 and Henry Ford has just introduced the assembly line in his Ford Motor Plant. Ford is looking for a manager to run a second factory in Detroit and up to eight student "managers" will compete for the position.

Drawing from a pool of 40 extra credit points, competitors must purchase materials from their teacher to build a paper car model. They can also hire workers to help produce their cars. The costs per material are: 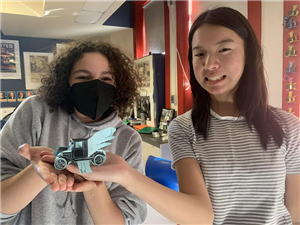 Imitating the formation of labor unions in the mid-19th century, the workers can then choose to unionize and bargain collectively for a union salary of points. For example, eight points per worker per day. Non-union workers may negotiate on their own for a salary.

The manager(s) with the most completed cars will win the competition. Other managers will lose all their points. In the end, workers will keep their negotiated points for work done in the factory. Managers can fire or hire workers at any time. Workers may quit, strike, or be hired by another factory at any time.

Any student not chosen as a company owner or worker will become a government inspector. The inspectors get the job of rating each car as perfect, acceptable, or rejected.

After all workers are paid, the managers with the most points win extra credit. Winners can keep that credit, or, in a philanthropic manner, share it with their peers.

Cecere, who has been a Social Studies Teacher at Farragut Middle School for over 30 years, created the lesson earlier in his career. The Social Studies Department has partnered with students throughout the years to evolve it.

“After considering the lesson, we thought to expand the goal of constructing model cars to include a lesson on economics where several student factory managers must use a budget to purchase materials and hire their peers as laborers to compete to build Henry Ford's Model T factory in Michigan,” Cecere explained. “We’ve added both the basic Model T car designs and luxury Ford cars so that students can decide whether to produce mass quantities of basic cars or make smaller quantities of luxury cars, which turn a greater profit. Contracts must be signed for labor hires and for any factory mergers.”

The assembly line lesson serves as an example of Hastings students learning through first-hand experience.

"I've observed the benefits of this lesson in helping students understand historical events, people, and the struggles of the time period. In this instance, they are also given a window into business ethics and the formation of labor unions," said Cecere.